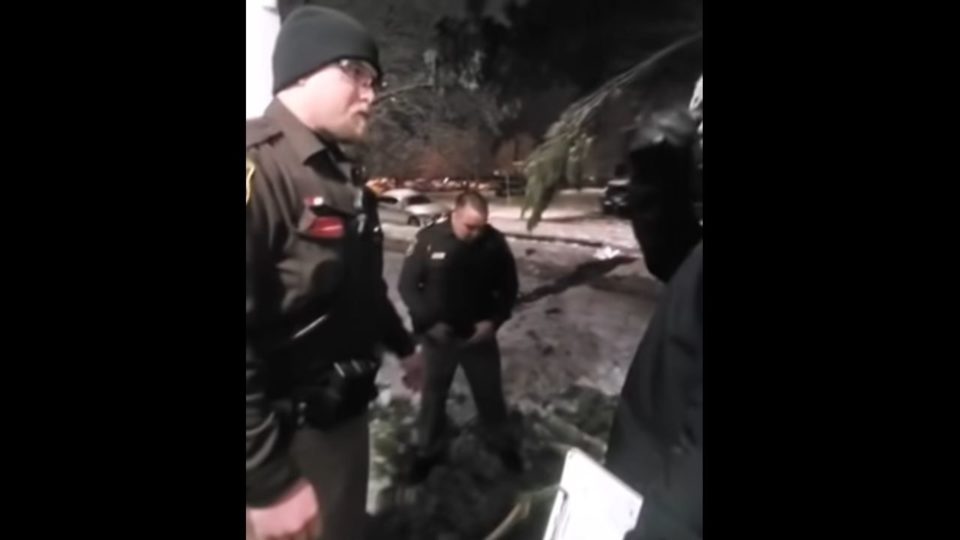 After a video clip showing a blatant violation of police power is turning heads.

In the video, a white police officer is seen arresting a Black man who was collecting signatures in his neighborhood in Michigan. The Calhoun County Sheriff’s Department later fired the police officer involved in the incident.

According to MLive, a white sheriff’s deputy has been terminated after he arrested a Black man, who lived in the neighborhood, for collecting signatures to start a tenants’ association.

As a neighbor filmed the encounter, the deputy had arrested La’Ron Marshall earlier this year on Jan. 2, as he was standing on a neighbor’s porch in the Springfield area of Michigan. Marshall was approached by the two deputies and had been told that they had received a call about a suspicious person going door-to-door soliciting.

As the video below reveals, Marshall stated he wasn’t soliciting anything, nor taking any money as the officers continued to harass and then arrest him in front of his child.

The Calhoun County Sheriff’s Department released a statement pertaining to the firing of the deputy.

“Transparency and honesty to our community is the foundation to all of our success. The conduct and actions of this case, in which Mr. Marshall was collecting signatures, does not represent our commitment to our community. The actions that Mr. Marshall took that day of circulating a petition are protected by our constitution. While some ordinances in communities, even within Calhoun County, prohibit vendors from selling items without a permit, no law—local, state or federal—prohibited Mr. Marshall from exercising his constitutional rights on January 2.
Sheriff Steve Hinkley and Undersheriff Tim Hurtt had a productive conversation with Mr. Marshall and his attorney two weeks ago, and the criminal charges in the case were dismissed. We are reviewing procedure, policies and training to ensure our community receives the best service from our department.”
Although the deputy wasn’t identified, the statement revealed the deputy who chose to arrest Marshall has been terminated.