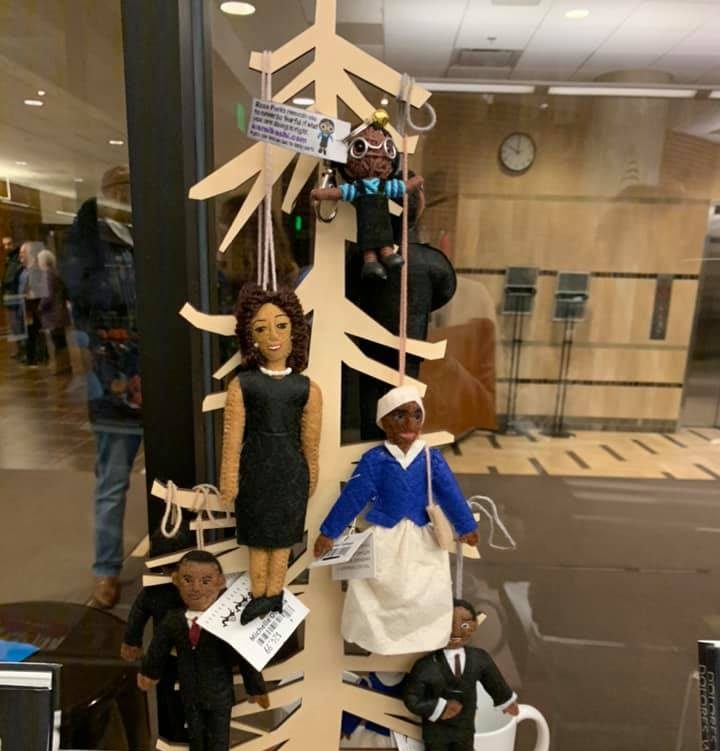 Michigan State University issued an apology over what black students called an offensive display that featured African American dolls hanging from a tree.

The display, which was discovered inside of the Wharton Center gift shop on the school’s campus, showed historical black figures hanging from rope-like strings on a rack that resembled a tree, reports WLIX. Student Krystal Davis-Dunn shared photos on Facebook of the display, which included prominent figures like Martin Luther King Jr., Harriet Tubman, Prince, and Barack and Michelle Obama.

“What a way to honor Black History! My intention posting these images was to vent and highlight the continuous acts of microaggressions I’ve experienced as a Black student at MSU. The symbolisms in these photos explains itself,” Davis-Dunn wrote on Facebook.

In another photo posted on Facebook, she acknowledged that historical white activists from the Suffrage Movement were also hanging from another rack alongside two black leaders. Still, she said the displays were racially insensitive.

“Non-people of color may not be provoked or triggered by these displays, but for me and the group of people of color I was with… it was a visceral experience,” she wrote. “Trauma lives in the body and the subtle and subliminal message evoke feelings of harm and a sense of being unsafe.”

“I don’t want to constantly be confronted with images, displays, you know, these messages like all the time like it’s a painful response. It’s a painful reminder,” Davis-Dunn told WLIX. “The lack of culture and humility is very evident on campus that things like this continue to happen.”

In response, the university removed the controversial display on Friday and apologized to those who were hurt and offended.

“We were made aware of an inappropriate and insensitive display at the Wharton Center Gift Shop which used a tree-like rack to hold historical black figures. Regardless of the intent of the display, its impact cannot be ignored—people were hurt and offended. We sincerely apologize to our community members and have immediately removed the display,” reads a statement issued by the school, according to WLNS.

“Additionally, after the Wharton Center reported the incident, it agreed to provide employees and volunteers with racial bias training that focuses on the impact and understanding of intentional and unintentional racial bias. We have work to do, and MSU remains committed to creating a culture that is inclusive and safe for all faculty, staff, students and visitors. As we enter Black History Month, it’s important we not only recognize the many contributions of African Americans, but we remember history and confront all bias.”

Nevertheless, students say this isn’t the first time they felt targeted at the university. Back in October, a noose made out of toilet paper was found hanging from a door in a residence hall. “This isn’t MSU’s first run into something similar to this and also that this can’t keep happening,” MSU student Adam Hafner told WLIX.

“How many apologies are they going to make, how many more apologies?,” Davis-Dunn said. “What is the action plan? I need something real. I need some transparency. I need to know what is happening.”