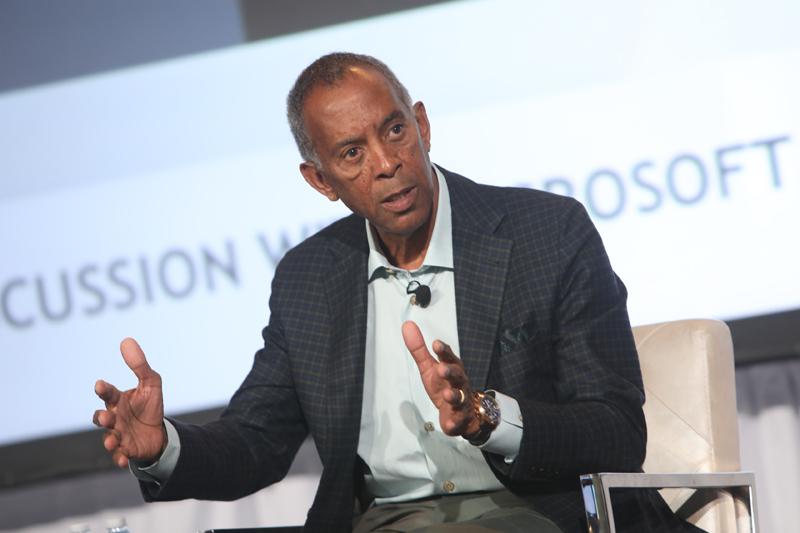 (Microsoft chairman of the board, John Thompson)

“We don’t mind people of his color in our store, but we don’t want them in our office…” was part of the recount of a racist incident that Microsoft’s Chairman John W. Thompson experienced during his early days as an IBM salesman.

In a fascinating fireside chat, Thompson spoke of a harsh incident of racism he was subjected to during his years at IBM and also spoke of the need for blacks to “assimilate” to corporate culture.

The chat was held during a gala event as part of the week-long Wall Street Project Economic Summit in New York City. The discussion also included the Rev. Jesse Jackson and was moderated by Navarro Wright, president, Maximum Leverage Solutions.

How a Racist Incident Turned Beneficial

“The first time the issue of my ethnicity came up, I had been at IBM for six months and I was riding with the sales rep who was a year and a half or two ahead of me,” said Thompson in response to being asked about the first time his being black intercepted his rise in the technology industry.

Thompson recalled that day when he and the senior IBM sales rep drove to Dade City, Florida, to complete a sales order at a Napa parts distributor.

“Tom [the IBM sales rep] gets the guy to sign the order and then he whips out three cigars. And the guy looks at me and says, ‘So what do you do?’ And I said, ‘Well, I am a sales trainee and in another 12 months or so, when I get through my training program I am going to be a sales rep like Tom,” Thompson told the audience.

“And he says, ‘Oh, really?’ I went, ‘Yeah, really.’ And so he looks at Tom, looks back at me and says, ‘Don’t bring him here ever again.’ The Napa parts distributor then explained that black people were not welcomed in the office although they were allowed in his store.

Thompson explained that the ugly incident actually helped accelerate his career at IBM. He was concerned that as a salesman, he would have to try and sell computers to “yahoos like that” to support his family. IBM, a company with a history of supporting diversity within its walls, acknowledged the difficulty that being black posed for Thompson as a salesman and fast-tracked him to selling large, enterprise accounts.

“I immediately started selling to large accounts and it cut, literally, five years off my career path in the very early days. And I got a lot of support from the branch teams,” remembered Thompson.

Thompson is recognized as the highest-ranking African American in Silicon Valley. He made headlines when he became the CEO of Internet security company Symantec. However, the focus on color tends to rankle him.

Thompson on the Lack of Diversity in Tech

When asked about the lingering issue of the minuscule numbers of people of color in tech companies, Thompson pointed out the issue with cultural differences.

“The tech industry has many iconic companies. But it has literally thousands more employees that work in small companies of less than 100, 200 people,” he said.

“And that small ball of companies is all about a small network of people that worked together in college or worked together in some other company. And that little network is what makes up the vast majority of the employment in Silicon Valley. Not HP, not Symantec, not Microsoft. While those are big companies, they pale in comparison to the population that’s employed by all these little startups. And in those little startups there’s this cultural alignment thing–there’s this psychological technology alignment thing that kind of prevails and so I think the answer to solving this issue is to first…we have to get the larger companies focused on diversifying, that’s for sure, but second and most importantly, long-term, we have to deal with the foundational issues of enough African Americans, Hispanics, people of color, who have technology backgrounds; who have the interest and want to work in tech.”

“I didn’t want to work in tech,” said Thompson. “But I found out I could make good money so I decided to stay…”

The Need for Assimilation

Thompson was asked what African Americans can do to get in the door of more tech companies.

“I think there are many, many young people who would like to have opportunity. And I think one of the things that became really, really important to me in my early days at IBM [was] that I had to assimilate,” Thompson said.

He said that becoming a part of a company’s culture is important and that he was resistant to the IBM “look” when he first started at the company almost 30 years ago.

“I wouldn’t wear a blue suit” he remembers, speaking about the typical IBM employee dress style back then. “I just thought it was the most boring thing in the world.”

“And I looked around one day and I said, ‘Boy, I look different from anyone else here.’ And it was because I hadn’t embraced the idea that you’ve got to be part of the culture. So you’ve got to look like a darn Brooks Brother model, right? The white shirt and blue suit, the tasseled loafers and striped tie. Once you get in the door you cannot hold on to your past, you’ve got to look forward to the future.”

“Assimilate into the culture of the organization,” Thompson advised the mostly African American audience. “Because I don’t think these companies are looking to keep us out. We’ve got to want to be there.”