Microsoft Opens Up Beta of Socl to Wider Audience 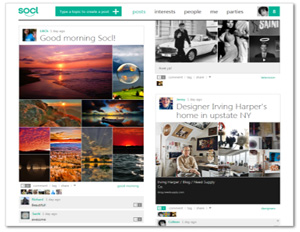 Microsoft’s new social network Socl, pronounced “socialâ€, isn’t looking to compete with Facebook but wants to test its social abilities and the power of image-based search in the marketplace.

Powered by search engine Bing, Socl is visually appealing and places a strong focus on aesthetics through its photo collages. Users create these collages to be shared on Facebook and Twitter, similar to Pinterest; additionally, the site offers users a Me Page, video sharing parties and People Hub to discover various user profiles.

Socl is looking to revamp the way people search. “Search for most people is still mostly about the blue links. Images are secondary,” said Lili Cheng, general manager of the company’s FuSE (Future Social Experiences) Labs team, in an interview with CNET.

The new social network has been in its beta test stage for a year and soft launched in May. Initially targeted at students, Socl is now open to a broader audience and might be used as a springboard to gain attention for upcoming products like a rumored Xbox style device.

The site is already gaining a lot of attention in India, according to Google Trends. BBC is reporting that Richard Edwards, an analyst at research firm Ovum, highlighted that while the Western world was saturated with social sites, other regions were “ripe for a new type of social network”.

If you feel there’s room in your social network portfolio, create an account on Socl. Let us know what you think about the emerging platform in the comment section below.