Everything You Need to Know About Microsoftâ€™s Xbox One 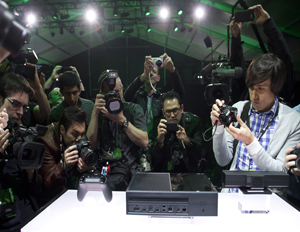 Xbox One following the Xbox One reveal event on Tuesday, May 21, 2013, in Redmond, Washington (Image: Karen Ducey/Invision for Microsoft/AP Images)

It’s been eight years since Microsoft debuted a video game console, having launched the Xbox 360 in 2005, but the company is back with a new device: the Xbox One. Microsoft unveiled its newest gaming device on Tuesday, weeks shy of the Electronic Entertainment Expo (E3) where more details will reportedly be released.

The new Xbox One console is a large, black, sleek box designed to rest on its side, with a top-loading optical drive.

The technical aspects have yet to be released by Microsoft, but the Xbox One reportedly runs on a 8-core AMD processor with x86 architecture with 8 gigs of RAM.

The Xbox runs three different operating systems. There’s an upgraded version of the Xbox operating system, another that’s based on the Windows NT kernel, and the last one helps discussion between the two systems.