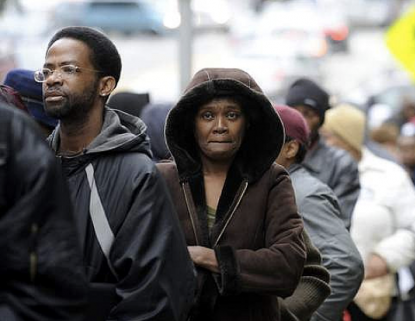 A line for federal assistance in Detroit, taken in 2012. Getty Images.

It appears the rich is getting richer and the poor is getting poorer.Â  According to a new study by the Pew Research Center, the middle class population is continuing to shrink while the two classes on the extreme odds of the spectrum–the poor and the rich–continue to expand. The middle class and its wealth is continuing to deteriorate with most of its source connected to the housing crisis.

In the past 4o years the middle class population has shrunk by 10 percent, while the poor and the rich classes have increased significantly, according to a chart by the Pew Research Center. Of the 2,500 people the center surveyed 85 percent of those who identified as middle class said that it is more difficult now than it was a decade ago to maintain their standard of living.