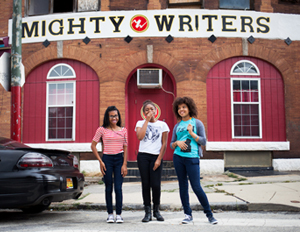 Mighty Writers, a free program based in Philadelphia, augments the writing instruction its participants receive in school.

“In Philly, there’s a real need,” says Khalia Robinson, a Mighty Writers program director. “Mighty Writers teaches kids to think, write, and communicate with clarity,â€ Robinson told me recently in an email. “Philadelphia has a serious literacy deficit, and Mighty Writers strives to close that gap.â€

Reading and Writing Go in Tandem

As I’ve written before, black children across the country have low reading skills.

Kids who have trouble reading will not write well, but the two skills reinforce each other. Robinson told me that she hosts an afternoon workshop for five- to 10-year-olds called Crafty Readers, and described a recent session:

“One Sunday, two of our five-year-olds, Kami and Rajieb, decided they were tired of being ‘left out’ of the story, so they went around the room looking for words they recognized and wrote them on their art paper to make their own ‘story.’ Of course, it was more of a word collage, but to see them so excited to do what the older kids were doing–writing stories–showed me that we at Mighty Writers are doing the right thing.â€

Robinson told me that children in Mighty Writers learn how to be better academic writers. Each student writes “two informative, persuasive, and narrative essays,â€ Robinson says, but the program also has a more creative component.

“Our volunteer-run workshops are a bit more freeform. The kids do a lot of creative writing–from sci-fi to sports writing, journaling to recipe writing,â€ Robinson told me. “Our volunteers have many creative gifts to share, helping the kids produce everything from haiku to published novels.â€

Robinson, who is known as “Mom” to the children in the program, says signing up for Mighty Writers is easy. Parents or students can sign up at www.mightywriters.org for any of the four sites in Philly.

“Some specialized programs, such as Teen Scholars and SAT prep, require an application process,â€ Robinson says.