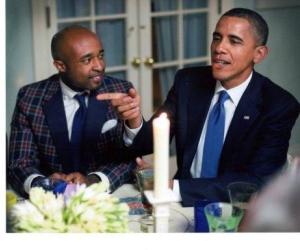 It’s not far fetched, especially these days, to see cultures intertwined within each other. Things that would have been impossible years ago could be the norm now. Is there such a thing as strange bedfellows anymore?

Music has crept into politics and in some cases, it is the background of the campaign. Some people enter one arena and shine in another. This is where Mike Muse, CEO of Muse Recordings, enters. No, he didn’t provide the soundtrack or even a song in the re-election campaign of our nation’s first bi-racial president. All he did was “Kick in the Door” like The Notorious B.I.G. and is now a member of President Obama’s National Finance Committee.

Not bad for a boy growing up in the Midwest who now resides in, arguably, the biggest and most electrifying city, New York.

BlackEnterprise.com: Who is Mike Muse? What is your background and tell me about Muse Recordings and your accomplishments with the label.

Mike Muse: I grew up in a small town called Lansing, Michigan, a capital city, where as a community you feel the direct impact of the automotive industries economic highs and lows more so than the impact of the legislation that is being passed in the dome rotunda down the street. A city where our parents; mostly products of the civil rights movement, reverse gentrification and work place inequality were often the enablers of thought for hope and inspiration of what can become of hard work and education.

I attended the University of Michigan, received an Engineering Degree while doing Nuclear Chemical Research, and now I am charting a course at the intersection of Music & Politics.

Muse Recordings is an independent record label with major accomplishments. Strategic partnerships were created that include Starbucks, McDonalds, Chrysler, NFL, and the NBA; we have established a reputation of quality and innovation.

How did you become involved in the political game?

Good question, looking back in hindsight, at an early age I realized that there could actually be a seat at the table of influence and policy implementation that allows us to be the change we see and not the byproduct of what is passed down. By being a twice invited guest to the White House during the Clinton administration as a youth, a youth appointee to the city of Lansing Mayor’s police and community relations committee, there was a seed planted in me. I realized that the table I was sitting at was different than any other one I’ve ever dined before on. It was this seed that led me on a journey to New York City to challenge the status quo of success and to participate, in a campaign for then, presidential hopeful Senator Barack Obama’s Tri-State Area Fundraising Committee. The purpose was to assist in raising funds that supported a vision to inspire a nation and a world.

So, from my understanding, you believe that music goes hand in hand with politics; could you explain that philosophy and what made you come to this conclusion?

Yes, both share an intrinsic belief system that they have a product, vis a vis, creation of music or of policy that can change lives. I have always lived life outside the box and it was through this lens that I made the connection. I see it my own way that can’t be replicated or mass produced into a process; it’s all intuitiveness.

For someone so young, you’ve achieved accolades that people have to work nearly 30 years to achieve, what motivates you and how does it feel to be recognized for your contributions?

Wow, thank you. I don’t rest on any laurels or allow the accolades to define who I am. I just thank God for blessing me with every opportunity that has led me to this moment. He has given me many gifts that I do not take for granted. I am always reflective on a simple parable “for whom much is given much is required,â€ which is why I continuously ask myself the question of: “how can I make not only myself better, but others that are within my reach?â€ This is done by a style of work ethic that is bold and non-traditional. It is within this daily routine that I aim to plant seeds of engagement and inclusion.

If I decided to take a path leading to politics and fundraising, what advice would you give and what would it take to try to come close to being almost as successful as you?

You will first have to buy into my personal mantra of what fundraising really is; It’s a simple notion that recognizes fundraising is more than an exchange of hors d’oeuvres, beverages, and checks. Moreover, it’s a committed exchange of ideals and knowledge transference that allows me to go back, impart, and bring in others to pay it forward. It can be a room full of those who simply purchase campaign buttons or who hold dinner seat assignments, nonetheless, the most important notation is that they are all considered influencers of a new status quo.

What is the ultimate goal for Mike Muse, long term?

To look back on my life with no regrets and sing “I did it my way.â€

How does it feel knowing that you are the youngest to raise over a $1,000,000 for President Obama in a year? And, of course, not to doubt your abilities, but did you even think you would have made such a contribution knowing that you weren’t as ‘big’ as the Hollywood heavyweights or have been involved in fundraising like other celebrities asking for support for the president?

That’s the beauty of it all, that I am not a big Hollywood heavyweight, a celebrity, or a Wall Street titan; I am just a simple guy from the Midwest that bought into the vision of a man that had the audacity to run for President of the United States of America given the known challenges he would face. That in of itself is the juxtaposition of our lives; the audacity to try against the doubts of others. I never knew that dollar would be my result, it was never a goal. In the beginning, all I wanted to do was to get people to buy into why I am supporting him. I wanted to share his accomplishments that have made this country stronger. I wanted people to understand what his presidency represents; it’s bigger than the man himself. I hope those that are younger will see themselves in me and not be afraid to try; to get off the sidelines and not be intimidated by the game.