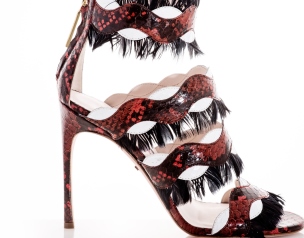 As reported in Crain’s Chicago Business, Reynolds recalls how she spent a lot of time in her mom’s Hyde Park closet growing up, enchanted by her extensive collection of designer heels. In fact, after coming up with roughly 20 designs she was happy with, Reynolds showed them to her mom first, when she came to visit her at college.

“I want to start a shoe brand,” she recalls telling her mother. “I’ll be the designer, and I want you to help me build the business around it.”

After graduating from the University of Chicago Laboratory School, Reynolds enrolled at the University of Southern California. During the summer after her junior year, she went to Milan for a training program at the ARSUTORIA, a top accessory design school.

Upon the time of her graduation, Reynolds realized that she was faced a tough choice: work as a designer at one of two major fashion houses that had expressed a fondness for her designs, or try to giving her own company a go, according to Crain’s Chicago Business.

…And the Rest Is History

The overall aesthetic of Kendall Miles Designs was inspired by the fashion of the 1940s and 1950s. To get on people’s radar as a sought-after luxury brand, Reynolds understood that her shoe designs needed to be super sexy, super high stilettos with special accouterments, such as ostrich feathers; perfectly dyed snakeskin; shiny, gold hardware; and so forth, Reynold’s told Crain’s Chicago Business. She conducted much of her research in vintage shops of both Paris and New York, in search of shoes with beautiful, super feminine, delicate details. Handcrafted in Florence, Italy, the collection was named after herself and her little brother, Miles.

Today, you can find Reynolds’ shoe collection online. Her spring/summer 2017 line, which uses an Egyptian motif through an assortment of semi-precious stones, is set to debut soon. This collection will also include a lower heel height and even a few flats.

Kendall Reynolds Opens Up on Facebook Live for #AskBE

BLACK ENTERPRISE was fortunate enough to sit down with Reynolds for a Facebook Live interview, in which, the young designer candidly discussed her experience growing up with investment bankers as parents. She also explained how heartbreak over a difficult breakup during college led to her sketching shoes and launching Kendall Miles Designs.

Check it out below: