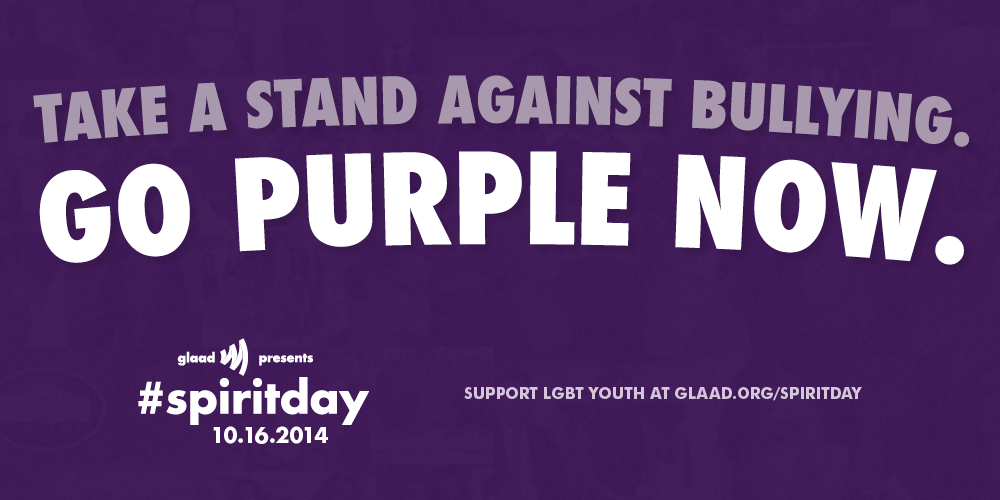 Millions will go purple on Spirit Day, October 16, in a stand against bullying and to show their support for lesbian, gay, bisexual and transgender (LGBT) youth. Everyone from Oprah to Laverne Cox to Facebook and MTV is expected to don purple for Spirit Day. Even the White House has joined the cause.

Observed annually since 2010, students, schools, parents, organizations, corporations, faith groups, celebrities, pro athletes, and public figures wear purple, which symbolizes ‘spirit’ on the rainbow flag (a symbol of LGBT pride). On this day communities come together to send a message of solidarity and acceptance of LGBT youth. Spirit Day now occurs every year on the third Thursday in October, during National Bullying Prevention Month, and has become the most visible day of support for LGBT youth.

Emmy-nominated actress Laverne Cox of the Netflix breakout hit series Orange Is The New Black will light the iconic New York Empire State Building purple for Spirit Day on October 16, marking the first time that the world’s most famous office building will go purple for Spirit Day in a stand against bullying, reports the Gay & Lesbian Alliance Against Defamation (GLAAD).

“By recognizing National Bullying Prevention Month and lighting in purple for Spirit Day, the world’s most famous office building is supporting countless kids across the world,â€ GLAAD President & CEO Sarah Kate Ellis, said in posted news on GLAAD’s website. “At a time when eight in 10 LGBT youth are harassed at school, it’s critical that we let them know it is okay to be who you are.â€

“Bullying was an unfortunate part of my daily reality growing up in Alabama,â€ added actress and advocate Laverne Cox.Â “I am committed to doing what I can so that young people don’t have to go through what I did. All of our children need to feel safe to be themselves at home, school and in our communities.â€

Cox will be accompanied by GLAAD and the youth featured in Laverne Cox Presents: The T word, an upcoming documentary that will premiere on MTV and Logo TV onÂ Friday, October 17 at 7pm ET/PT.Â The documentary, which was produced and hosted by Cox, takes an intersectional look at the lives of seven transgender youth across America. The T Word is part ofÂ MTV’s “Look Different” campaign, which aims to fight race, gender and LGBT bias.

Since 2010, following a string of high-profile suicide deaths of gay teens, GLAAD has worked to involve millions of teachers, workplaces, celebrities, media outlets and students in going purple on social media or wearing purple, a color that symbolizes spirit on the rainbow flag.Â About 8 out of 10 LGBT youth say they’ve been bullied at school because of who they are.