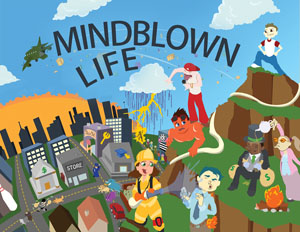 For many startups looking to generate funds through crowdfunding platforms like Kickstarter, it’s hit or miss–and any seasoned or budding entrepreneur will tell you that it’s not as easy as it seems. Â There’s a special technique, “secret sauceâ€ if you will.

Based in Oakland, California, education technology startup Mindblown Labs found the recipe to that “sauce,â€ surpassing their Kickstarter goal of $75,000. The startup raised $77,522 for the company’s financial literacy game, Mindblown Life (MBL). Set to debut in 2013, MBL merges life-simulation elements and wit to teach young Americans money management and financial literacy skills. Similar to The Sims, the game allows users to create a customizable avatar, choose their career and engage in various social experiences as they would do in their real life.Â  Mindblown Labs collected more than $44,000 in the first 10 days of the project and made history in the process. MBL, which is currently in private beta, has reportedly raised more money than any other mobile-only game in the crowdfunding platform’s history. The previous record was set by Zombies, Run!, which raised $72,627, in October 2011.

“We are excited and appreciate that so many people have contributed their hard-earned cash to help us launch Mindblown Life,â€ said founder and CEO Jason Young in a recent press release. “Not only has our campaign helped us get one step closer to bringing an innovative personal finance solution to millions of young adults, it’s also demonstrated that, by contributing to a project like ours, people can help tackle seemingly insurmountable problems without waiting for the bureaucrats and politicians to catch up.â€

Young, who started his first business at the age of nine and three others prior to college, shared with BlackEnterprise.com what made his latest venture successful:

The Harvard graduate started preparing for the launch of the Kickstarter campaign more than six weeks before launch. Â “We [Mindblown Labs] performed a detailed analysis of both successful and unsuccessful campaigns,â€ Young said. Â “We called some of the folks behind the stand-out campaigns for advice. Â Based on all of our research, we developed and executed a robust action plan.â€