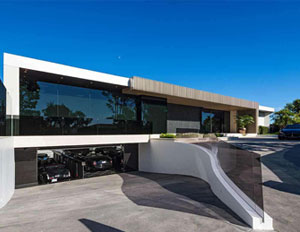 23,000 square feet, 14 bathrooms, and an infinity pool are just a few of the perks in this massive Beverly Hills home. (Image credit: Ben Bacal Realty)

The creator of a video game just one-upped two music superstars for a home in California.

According to Curbed LA, music power couple Jay Z and BeyoncÃ© were interested in purchasing an $85 million Beverly Hills mansion, an opulent home to say the least.

The 23,000-square-foot home has some amenities most would deem excessive: 8 bedrooms, 15 bathrooms, a car showroom, a candy room, a wine cellar, an infinity pool, and a 24-seat theater.

But an unexpected challenger ended up buying the property. Game developer Marcus “Notch” Persson purchased the home for $70 million, and even tweeted a photo of himself sitting near, appropriately, the candy room.

Luxury residential brokerage company John Aaroe Group handled the purchase, and in a blog post described how Persson came to acquire the Beverly Hills home. “Markus fell in love with the house, its sleek contemporary design and its spectacular panoramic views that sweep from downtown LA to the Pacific Ocean,â€ said Katia De Los Reyes who, along with Sally Forster Jones, helped negotiate the deal. “The fact that the house also was completely furnished in such great style was another major selling point for him.â€

Minecraft, a video game created by Persson and his game development company Mojang, is an adventure and sandbox-style game that allows players to build using blocks made of stone, wood, and other materials to construct buildings or weapons.

It exploded in popularity, garnering praise and awards for its freedom to create using your imagination, and open-ended gameplay. It’s sold over 60 million copies, making it one of the best-selling games of all time.

In September of 2014, Microsoft acquired the company for $2.5 billion.

After the acquisition, Persson quit Mojang, noting in a goodbye post how he never expected Minecraft to flourish in such a manner. “As soon as this deal is finalized, I will leave Mojang and go back to doing Ludum Dares and small web experiments,” said Persson. “If I ever accidentally make something that seems to gain traction, I’ll probably abandon it immediately.”

You can see the promotional video for the Beverly Hills estate below.