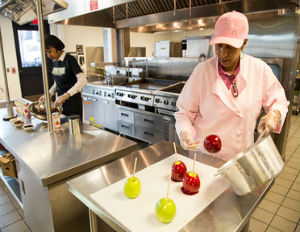 Detroit was a train wreck in the making for 30 years. But there is nothing that symbolizes Detroit’s comeback more than the city’s entrepreneurial spirit.

Today, Detroit is home to over 61,000 small businesses, including about 50,000 minority-owned small businesses. It is the fourth largest city for minority entrepreneurship. These entrepreneurs are opening restaurants downtown, rebuilding homes, and helping repair thousands of streetlights that were broken for years across the city.

Long-time Detroiters, millennials, and immigrants are establishing small businesses because the economy is growing and Detroit is an affordable place to open a business. With sectors like healthcare and advanced manufacturing improving, Detroit’s regional GDP has outpaced the national average, and it is the fifth largest export market in the United States.

Detroit has established itself as a city that welcomes and encourages business investment and wants all residents to participate in its recovery. It’s a good time to be an entrepreneur in Detroit. Helping small businesses grow is one of the many ways JPMorgan Chase’s $100 million investment is supporting the city’s comeback.

Still, challenges loom large for would-be entrepreneurs. They need to secure capital, licenses, and permits while handling their own marketing, accounting, and hiring. Fortunately for Detroiters, the city and its partners offer access to valuable resources that businesses need to get off the ground and grow.

April Anderson’s experience offers a useful illustration. I met April last year during a meeting with entrepreneurs at TechTown, a business incubator and accelerator in Detroit that provides workspace and technical advice to a wide range of businesses. April was born and raised in Detroit. From an early age, she had a passion for baking, but never dreamed that it could lead to her owning a business. In 2010, she went back to school to study pastry arts at Macomb Community College.

Detroit Kitchen Connect, an initiative of Detroit’s Eastern Market and FoodLab Detroit, helped April access a licensed commercial kitchen and other support services that allowed her to expand the number of baked goods that she could make from scratch. With this support, April was able to open Good Cakes and Bakes in Detroit’s Bagley neighborhood, and her goal is to one day make her kitchen available to other food entrepreneurs. By the way, a salient fact after a conversation with April last year is how proud she is of herself and her business. She said opening her own business is the hardest thing she’s ever done. But she absolutely loves it.

In April’s case, her community offered her resources that helped her build a thriving business. But we know that some entrepreneurs, especially minorities, continue to face enormous barriers to success.

Detroit Mayor Mike Duggan recently told me that the most important thing we can do to boost the city’s growth is support its minority entrepreneurs. I believe it is the job of institutions including banks, nonprofits, and government to collaborate and rise to this challenge by creating an inclusive environment where more people can fulfill their entrepreneurial dreams.

To do this, we need to focus on a few key things.

First, we need to expand access to capital, a challenge that disproportionately impacts minority businesspeople. Recent research shows that African American and Hispanic-owned businesses start with about half as much capital as nonminority-owned firms. They also rely more on investments from personal or family wealth than nonminority families.

Late last year, the Detroit Development Fund (DDF), with support from JPMorgan Chase and the W.K. Kellogg Foundation, created a fund to make loans to neighborhood businesses owned by entrepreneurs of color. With our support, DDF can offer financing to small businesses that do not qualify for traditional loans. To date, DDF has made 18 loans to 15 businesses valued at over $1.3 million, with a goal of lending $6.5 million to Detroit-based small businesses that are owned by minorities or hire minorities.

Entrepreneurs need more than just capital to succeed–they also need technical advice on business planning, marketing, and many other critical capabilities. Organizations like TechTown, Eastern Market, and other business incubators are providing just that sort of hands-on help, creating clusters of small businesses that can foster a virtuous cycle of startup growth.

The entrepreneurial spirit is alive and well in Detroit. People like April Anderson are not anomalies–they are bellwethers of the city’s resurgence. When we lower the barriers to business creation, especially for minority small business owners, we can unleash a wave of inclusive growth that will benefit not just them, but the entire city.

Jamie Dimon is the Chairman and CEO of JPMorgan Chase & Co. Two years ago, JPMorgan Chase made a $100 million, five-year commitment to Detroit’s economic recovery.