'Mississippi Goddam': Four Officers Take Group Photo With Black Suspect After Hunting Down and Arresting Him 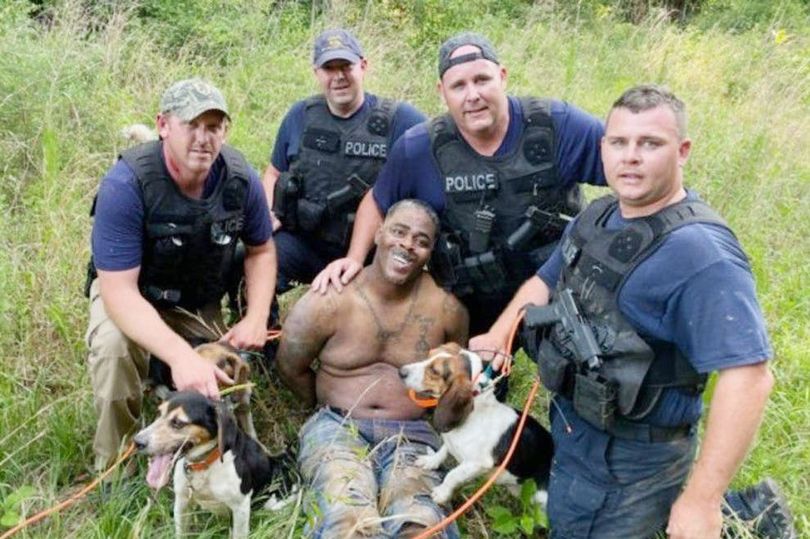 Four police officers that were part of an expansive manhunt were photographed in Mississippi with the suspect. The photo went viral, with people on social media saying the photo with a Black suspect looks racist.

In what appears to be a professional government and law enforcement operation concluded in a very lame and racist-looking group photo, Newsweek reported.

The mission was so demanding that the state sent out a drone to hunt down the Black perpetrator.

In the end, the operation was a success, one can suppose. However, it was excessive, considering the man was found 600 yards away from the Hancock Bank he stole from.

Eight different agencies went looking for a Black man who was hiding less than half a mile from the crime scene.

Eric Boykin was detained in what some believe was an inhuman fashion—he is shirtless, surrounded by four white officers, some of whom were smiling and posing for the camera, accompanied by two dogs in the woods.

One can view the image and make the assessment that the photo appears like the police officers from Prentiss Police Department went on a hunting trip, but instead of an animal they caught a “wild Black man.”

The tone-deaf image appalled Black social media, who saw the image as a sign of abuse.

The officers from Prentiss Police Department took the picture after arresting Eric Boykin for an alleged bank robbery.
https://t.co/sfiFN4gQou

Not much is known about the robbery itself or how much money Boykin allegedly stole.

Bank robberies in Mississippi are regarded as one of the most serious levels of crime in the state and carries a sentence of three years to life imprisonment, according to Federal Charges.