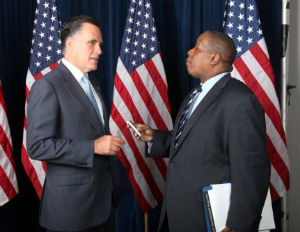 If you’re elected, where do you expect to see the unemployment rate?
I see it being 6% or less by the end of my [first] term. We’ve put together a model. One: Aggressive use of domestic energy. Two: Opening new trade for American goods around the world, particularly in Latin America, where we have natural advantages. Three: Scaling back the growth of the federal government because it’s scaring the investors of the world to put money in America given the size of our deficits. Four: Building human capital, meaning giving people the skills they need for the jobs of today and improving our schools. Then number five: Restoring economic freedom, making America the best place for entrepreneurs and innovators and small and big business again. That means lowering tax rates, taking out the special deals and exemptions and loopholes that are currently there.

An interesting plank on your platform involves re-employment initiatives.
One of the things that I found in my state [of Massachusetts] was that people who’d been unemployed for long periods of time had a particularly difficult time getting a job. We put in place a small program that I would like to see expanded upon. We said if you hire someone who’s been unemployed for a year or more we will pay your company $2,000 to train that person. I’d like to see it applied on a more extensive basis. I favor the idea of giving small businesses either tax credits or training credits to hire people who they might otherwise not have hired.