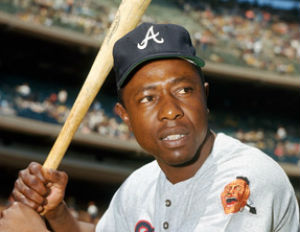 Major League Baseball is celebrating the legacy of Jackie Robinson this month in conjunction with the upcoming release of the movie “42.â€

Today, we have a quote from one of baseball’s legends and icons, Hank Aaron. “Hammerin” Hank Aaron suffered his share of racial injustice as a MLB star. He discusses the importance of the man who broke baseball’s color barrier, and how it opened the door for him to play the game he loves.

“They say certain people are bigger than life, but Jackie Robinson is the only man I’ve known who truly was. In 1947, there were separate schools for blacks and whites, separate restaurants, separate hotels, separate drinking fountains and separate baseball leagues. Life was unkind to black people who tried to bring those worlds together. It could be hateful. But Jackie Robinson, God bless him, was bigger than all of that.â€