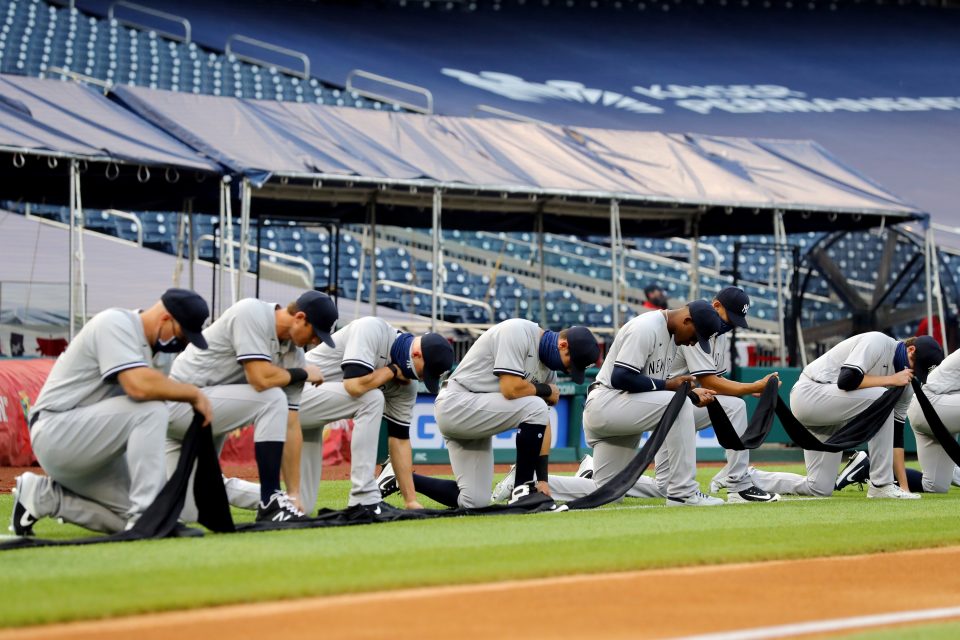 Yankees players take a knee before their first gamed of the season. Image: Twitter/@nowthisnews

Major League Baseball had its opening day Thursday, after being delayed for four months, and players were quick to take a knee to express Black Lives Matter.

According to Yahoo Sports, in a coordinated gesture between the reigning World Series champion Washington Nationals and the New York Yankees, players clutched a black cloth that winded from the Nationals’ first baseline around to the Yankees on the third baseline.

Then, before a pre-recorded rendition of the Star-Spangled Banner, every player and coach out for pregame introductions took a knee on the grass, for about 20 seconds.

Players from both teams kneel together in unity before tonight's National Anthem. #OpeningDay #NYYforNY pic.twitter.com/ptW2FgfzUe

Many Yankees players wore shirts saying Black Lives Matter during pregame warm-ups as well. Just a year ago both actions would have received significant criticism. When Oakland Athletics outfielder Bruce Maxwell took a knee before a game in 2017 supporting the Black Lives Matter movement, he received backlash.

However, in the aftermath of the deaths of George Floyd and Breonna Taylor, things have changed.

Before the game, Morgan Freeman narrated a video played on the Jumbotron in connection with the Players Alliance, a group of MLB players working to elevate racial equality and provide greater opportunities for the Black community.

“In order to achieve effective change and create a new canvas of optimism, empathy must lead the charge. This moment signifies our charge. Our brotherhood. Our unity. Equality and unity cannot be until there is empathy,” Freeman said in the video.

The video was also played before the start of the game played between the Los Angeles Dodgers and the San Francisco Giants.

“To have everyone kneel at the same time, it was to give hope to any overall reason you want to do it,” said Yankees slugger Giancarlo Stanton after the Yankees’ 4-1 victory. “For me, it’s for the racial injustice and Black lives in general. And a lot of other things going on. We all have individual reasons to do so.

“I believe with everything we did beforehand, wearing the Black Lives Matter T-shirts, the patches, and the unity ceremony before, that’s what was decided.”