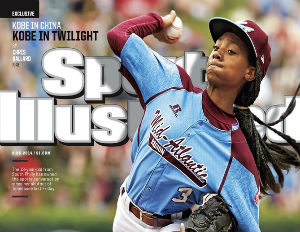 Baseball star Mo’ne Davis is continuing to prove that helping her team get to the Little League World Series was just an introduction to her greatness.

Aside from gracing the cover of Sports Illustrated and being named as one of Time’s “25 Most Influential Teens of 2014,” Davis is now chronicling her amazing 13 year journey in a memoir titled Mo’Ne Davis: Remember My Name.

Set to be released in March 2015 by HarperCollins Children’s Books, Davis says that she hopes her memoir will inspire people to follow their athletic dreams.

“When I joined an all-boys baseball team, my mom wasn’t too happy,” the Philadelphia superstar said in a statement issued Monday through HarperCollins. “I proved to her (and to me) that I could do anything I set my mind to. I’m just a girl that likes to play sports and I’m excited to share my story with everyone,” she said. “I hope it encourages people to take a chance and play the sports they want to play and not just the ones people expect them to play.”

The financial terms of Davis’ book deal have not been disclosed, but it is reported that author Hilary Beard, who co-wrote the book Promises Kept: Raising Black Boys to Succeed in School and in Life, will assists the young teen in telling her story.

16 Startup Competitions for Boosting Your Business