Stacey Abrams Has Her Finger On the Pulse: Questions Monica About Being 'Goonica' In Interview 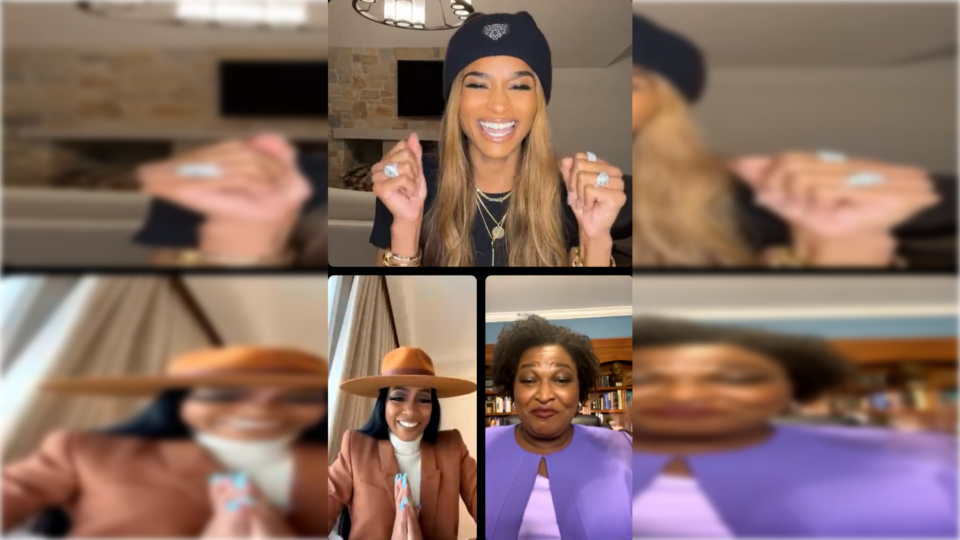 Fellow Georgia superstars Ciara and Monica recently banded together to share important information about the upcoming midterm elections, with hopes of encouraging others that their vote counts.

On Wednesday, September 21, the musicians invited Georgia Democratic gubernatorial candidate Stacey Abrams for an Instagram Live chat. Ciara and Monica deemed it important to allow the longtime change-maker to inform the people.

“In this case, the more we know, we can make the best decisions and get up out our houses and vote,” Ciara said in the live.

Abrams, a Yale-educated tax attorney, entrepreneur, writer, and small business owner, will be entering a gubernatorial rematch with current Georgia Gov. Brian Kemp (R) after narrowly losing to him in 2018. Regardless of the governorship, Abrams has continued to champion the people of Georgia.

“Just seeing the fighter in you, that inspires all of us,” Ciara said, which Monica echoed, saying that Abrams not only inspires women in the music industry but everyday women.

When Monica asked why people should care about mid-term elections and governors, Abrams replied, “Because they try to make sure we don’t.”

“That is the fine print in government,” she added.

“When governors, who control billions of dollars and so much of our lives, make decisions [it’s] because they know we don’t know who they are and the level of power that they hold.”

“The best way to combat voter suppression is to overwhelm the polls with our presence,” Abrams declared, emphasizing that voter fraud does not happen.

She argued that the current Georgia governor as well as the secretary of state are responsible for placing obstacles in the way of voting, including a lack of access to absentee ballots and making it easier for people to challenge your right to vote.

With this in mind, Abrams encouraged that “we cannot give into those obstacles” and to show up.

Monica expressed her concern for women and moms like her in the current landscape. The candidate for governor replied with her plans to help Black women and entrepreneurs gain access to capital, equity, and education mobility. She went on to explain her motive behind advocating for reproductive freedoms, expanding Medicaid, lowering healthcare costs, as well as saving hospitals.

“Our freedom as women to control our bodies…” Abrams started.

“Our freedom as voters to access. Our ability to make choices about who we are and who we love, all of these things are on the ballot because of the governor.”

“In this current day and age, the person who signs those bills pushes that legislation and makes decisions about the freedoms we actually enjoy.”

Although Abrams was there for the more serious matters surrounding getting people to the polls, she was playful too and had Monica blushing when she asked her about her alter-ego “Goonica.” Check out Monica’s shocked reaction at the 1:40 mark.

And she even asked Ciara about her prayer– the one she says helped her secure her man Russell Wilson.

The midterm elections will be held on Tuesday, November 8. For more information about Stacey Abrams and her policies, visit her website.