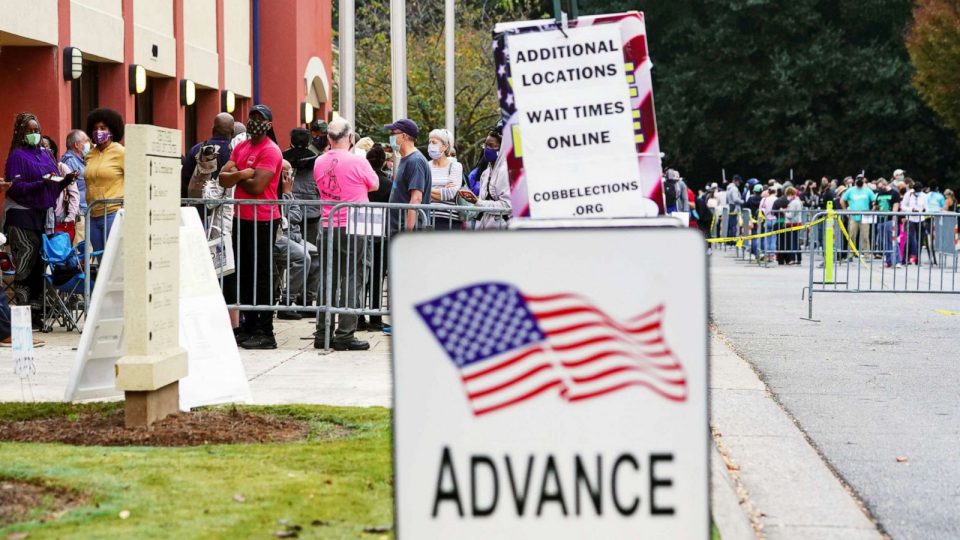 More than 169,000 Georgians voted on the first day of early voting for the Georgia Senate runoffs, a number that eclipses the first day numbers from the general election.

Additionally, 314,000 residents have already voted by mail, meaning almost 500,000 people have already voted. Abrams told CNN the Democratic Party is confident about its chances in the runoffs Rev. Raphael Warnock is taking on Kelly Loeffler in one race, while Jon Ossoff is going against David Perdue in the other runoff.

Early voting in Georgia has begun while Secretary of State Brad Raffensperger, a Republican, slammed his own party mates Loeffler and Perdue Tuesday for blaming him for President Trump’s loss in the state.

Raffensperger also took to Twitter to slam the two senators as they pushed for him to release data that he’s already made publicly available, but the two Senators do not believe is real.

“As embarrassing as it is for Sens. Perdue & Loeffler not to know that the data they want is already publicly available from the Secretary of State, it’s even worse that they’re not aware their own campaigns already have the data they’re looking for.”

According to FiveThirtyEight, both Warnock and Ossoff are leading in the polls but both races are within a point.
In the general election Perdue won 49.7% of the vote over Ossoff who received 47.9% of the vote. However, Libertarian candidate Shane Hazel received 2.3% of the vote, keeping both Perdue and Ossoff from the 50% mark, leading to the runoff. Warnock took first place in the other senate race receiving 32.9% of the vote while Loeffler received 25.9%. Neither Warnock or Loeffler could come close to the 50% mark to win due to 18 other candidates receiving at least one vote.

In addition to Republican infighting in the state between Raffensperger and the two Republican candidates, outgoing President Donald Trump is also hurting the two candidates with his attacks on Raffensperger and the state’s election systems.
Trump spent last weekend attacking both Raffensperger and Georgia Governor Brian Kemp on Twitter, demanding Kemp change voting rules to include signature verification. Raffensperger announced an audit of votes will take place in Cobb County. However, it’s not expected to change the results at all as President-elect Joe Biden won the state by more than 12,000 votes.
Trump’s supporters have begun to call for a boycott of the runoffs, forcing state Republicans to push even more for people to go out and vote. Another issue for Georgia Republicans is that money being donated to Trump for the Republican candidates isn’t going to either candidate but to Trump himself.
CBS News reported Tuesday that  75% of each contribution made to Trump, up to $5,000, will first go to Save America, then to the Trump campaign’s “Recount Account,” up to $2,800. The remaining 25% of each donation will be directed to the Republican National Committee’s operating account, and any money left over going to the party’s legal proceedings or headquarters accounts.
The races are paramount to Biden’s agenda. If Warnock and Ossoff both win, the Democratic party would essentially have control of the House, Senate and White House and can implement Biden’s agenda with almost no resistance.