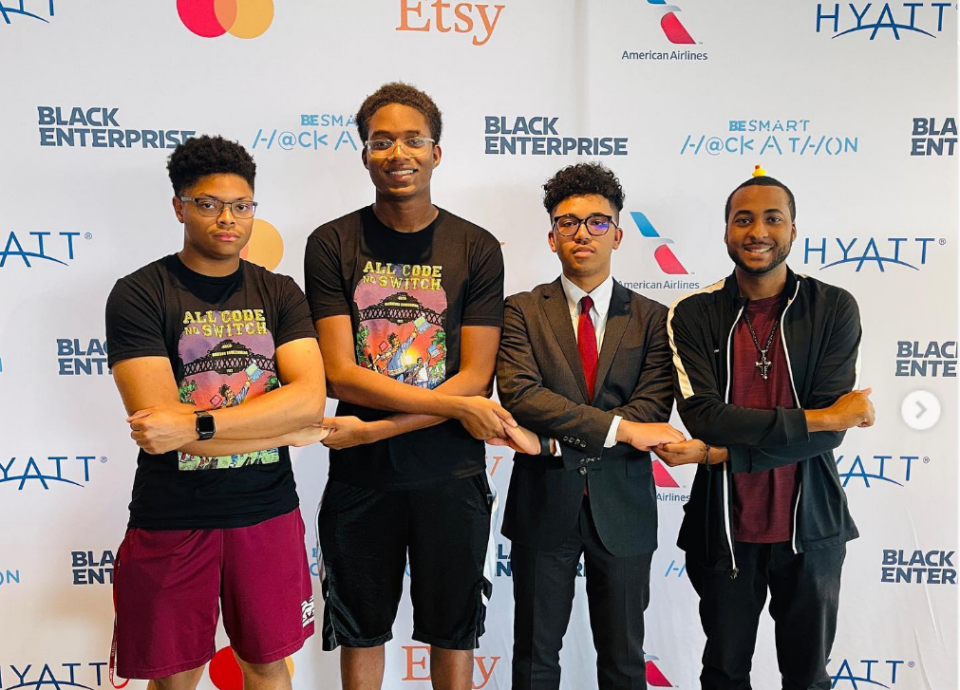 Morehouse Hackathon Team
The 7th Annual BE Smart Hackathon, hosted by BLACK  ENTERPRISE and American Airlines, has come to a close, showcasing a multitude of prize-winning teams representing the “best of the best” in tech among HBCUs across the country.
The three-member team from Atlanta-based Morehouse College scored first place in the hotly-contested final round. Its innovative luggage tag app giving customers ease and affordability when checking baggage, impressed the BE Smart panel of judges composed of top executives from American and DXC Technology, among other tech companies.

The second and third-place winners came from Alabama A&M  —  Binary Beast for its rewards app and Team Tai for its innovative enhancement of AA’s Advantage program.
Held at AA’s spectacular Dallas-based campus, the event, produced under the theme: “Homecoming 2022: All Code, No Switch,” offered a highly-competitive field of 23 teams from 19 HBCUs. There were 111 students—the largest number to compete in the hack.

In addition to American Airlines, the host sponsor for the past four years, Hyatt also invested in the event as presenting sponsor, representing its first-time involvement with the event.
“Let me acknowledge our partner American Airlines for opening this magnificent venue and, equally important, its continued investment in Black tech and commitment to creating new and expansive opportunities for the brilliant talent coming out of our nation’s HBCUs,” Earl “Butch” Graves, Jr., CEO of Black Enterprise, says of the airline that has hired 65 Hackathon participants over the past four years. “We also appreciate Hyatt for its collaboration and engagement.”
Other sponsors included DXC Technology, Etsy, Mastercard, Now and Later, Rap Snacks and Teradata.
In winning the competition, each member of the Morehouse team reached 100,000 AA Advantage miles and two hotel night stays at a Hyatt hotel of the individual’s chosen designation. Moreover, Tram Morehouse will gain the coveted opportunity to present its winning concept to Hyatt’s Chief Information Officer at the company’s Chicago headquarters.
The Morehouse hackers were overwhelmed by their victory—especially given that they only had three team members while most schools had five people in each group.
Elijah Truitt, an 18-year-old computer science junior, says he and his comrades were initially shaken by losing a team member before the competition. “We came together to focus,” he says. “I learned that sometimes you have to do things [you didn’t expect] to do and that sometimes you have to accept that some things will happen that you didn’t plan.”
For example, Truitt was not the original choice to give the presentation at the final judging but stepped up to help his team score the win. Other members of the team were Kevin Drew and Trent Gaylord.
Beyond the intense 24-hour hack, students gained the opportunity to learn new, innovative approaches and make connections with some of the leading professionals in the tech space.
“This has been an amazing experience,” says Asa Rogers, who studies computer science and cybersecurity at Alabama A&M.
“I’ll be prepared to do so much more when I get back to school and during internships.”
Even with the display of proficient technical prowess, many HBCU students contend with barriers to entering the field. Challenges persist despite the 2021 Congressional Bipartisan HBCU Caucus that these institutions contribute nearly $15 billion to the US economy and produce 42% of Black engineers and 47% of Black female engineers, respectively.
At the event, Black Enterprise held the Town Hall, “HBCUs:  Developing Top Tech Talent,” featuring academicians from North Carolina A&T and Jackson State University as well as senior executives from American Airlines and Hyatt to identify ways to bolster Black student retention in STEM programs; strengthening HBCU-Corporate partnerships; and parity on the recruitment and elevation of Black talent.
All agreed that such platforms as the BE Smart Hackathon would help increase the flow of the pipeline of HBCU grads into promising STEM careers.
BLACK  ENTERPRISE and American Airlines expect the event to be even bigger and better next year.
“We reserve the highest praise and appreciation for our participating historically Black institutions of higher learning. It bears reflection that HBCUs are the nation’s most undervalued resource. Year after year, these schools produce leaders and game-changers in every field.”
Tomias Davis, AA’s Development Program for Technology Director and one of the driving forces behind the BE Hackathon, told the scores of competitors: “You are all winners…You all exhibit HBCU excellence.”
Here are the first and second-place Hackathon winners:
Morehouse College
Elijah Truitt
Kevin Drew
Trent Gaylord
Second Place: Alabama A&M (Binary Beast)
Members:
Lyric Sampson
Da’Quandalon Daniel
Asa Rogers
Eyerusalem Girma
DeTavein Walker
Third Place: Alabama A&M (Tai)
Olasubomi Olawepo
Shemaiah Mbetwa