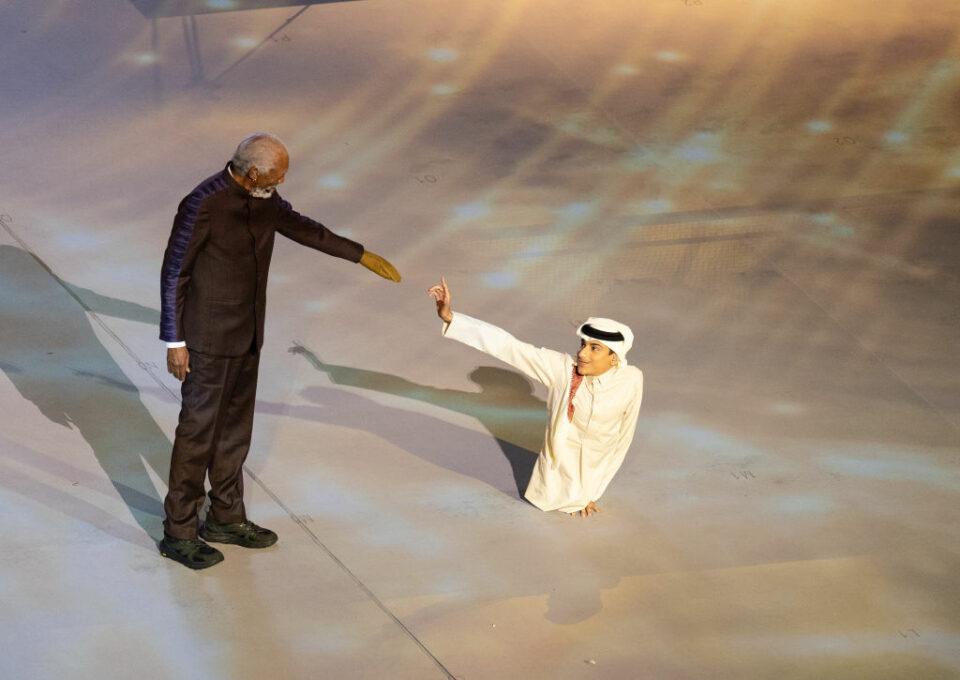 AL KHOR, QATAR - NOVEMBER 20: Morgan Freeman and Ghanim al- Muftah during the opening ceremony of the World Cup 2022 before the start of the game between Qatar (0) and Ecuador (2) at the Al Bayt Stadium on November 20th, 2022 in Al Khor, Qatar. (Photo by Simon Bruty/Anychance/Getty Images)

Actor Morgan Freeman is being criticized for participating in the opening ceremony for the FIFA World Cup Qatar 2022.

According to USA Today, the Academy Award-winning actor was on hand at the Al-Bayt Stadium in Doha to narrate the opening segment, The Calling, on Nov. 20.

Qatar is facing criticism for human rights violations, including its treatment of the migrant workers who worked to prepare for the World Cup. Qatar is also accused of abuses against the LGBTQ+ community and civil liberties.

Freeman spoke of the world as “one big tribe” during his speech at the ceremony.

“We gather here as one big tribe and Earth is the tent we all live in,” said Freeman. “What unites us here is so much greater than what divides us. How can we make it last longer?”

Freeman was targeted on social media for his participation in the ceremony. One Twitter user said he should be ashamed of himself. Another noted that Freeman must be “determined to go to the deepest level of hell.”

Also sharing the stage with Freeman was an ambassador of the FIFA World Cup, Ghanim Al Muftah. Muftah was born with Caudal Regression Syndrome, a rare disorder that impairs the development of the lower spine.

Muftah recited verses from the Quran to share a message of diversity and acceptance during the ceremony. Despite the backlash Freeman received from some, others considered his moments on stage with Muftah one of the most beautiful moments of the opening ceremony.

Creative director of the ceremony, Ahmad Al Baker, said that he wanted to introduce Qatar to the world through culture with a theme of “bridging distances” for the ceremony to signify “a gathering for all mankind, an invitation to come together as one, bridging all differences with humanity, respect, and inclusion.”