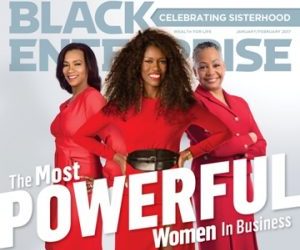 What makes a powerful businesswoman powerful? What is the secret sauce; that innate quality that helps successful women start, manage, or transform some of the largest companies in the world? We decided to ask some power players across a range of backgrounds–a president of a major sports league, a marketing guru for one of the most influential global brands ever created, and an executive that leads divisional operations for one of the most iconic fast food chains.

The relentless pursuit of excellence is nothing new to these women. According to a 2015 study on Black Women and Leadership by the Center for Talent Innovation, black women are 2.8 times as likely as white women to aspire to a powerful position with a prestigious title. The study also found that black women have been “leaning inâ€ for generations. They are far more confident in their business roles (43% vs. 30% of white women) that they can succeed in a position of power, and they’re clear on what they want to achieve outside the office: financial independence, personal growth, and social justice. They’re also more likely to say they’re able to empower others and be empowered (57% vs. 42%).

For example, let’s take a look at our cover subjects. Lisa Borders, president of the WBNA, brings over 25 years of experience to the league after serving as chair of the Coca-Cola Foundation and president of the City Council/vice mayor of Atlanta. Bozoma Saint John brings massive influence to Apple as head of Global Consumer Marketing, iTunes & Apple Music. Debbie Roberts leads strategy, talent, and brand development to drive long-term growth for thousands of McDonald’s throughout the Eastern United States.

These women represent our esteemed Most Powerful Women in Business–a listing that crosses industry, public and private companies, and roles. The impressive credentials of the women on this list place them among some of the most influential executives and entrepreneurs in the country. Despite consistent barriers to entry, these women continue to use their leadership prowess to manage the bottom line but also to shape the direction of future generations of business leaders.

How we selected our most powerful women:

– Many executives are among the highest ranked in their companies; they hold C-suite positions including CEO, CMO, COO, CAO, CHRO, and CIO.

– Executives of major corporate foundations and large nonprofits were included. However, those holding the position of chief diversity officer, or executives who oversee corporate communications, investor relations, and external affairs were not.

– The BE 100s CEOs included those who manage businesses that are among the largest black-owned companies across industrial categories.