Mother/Founder Paradox and What It Means for All Entrepreneurs 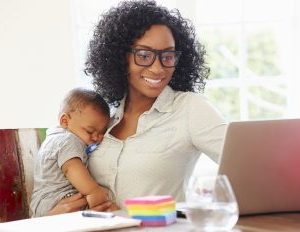 After spending much of our engagement diving into data and testing many new business ideas, my husband and co-founder, Danny Boice, and I finally decided to pull the trigger on our on-demand private investigator startup during our honeymoon. That same year, we had a baby.

I spent the first months of the company’s founding nursing a newborn and advising from behind the scenes. We had exponential growth from day one, and that immediate traction meant that Danny and I were working around the clock. All the while, we were caring for a baby, being the best parents we could to our four other children and buildingÂ our company into everything we knew it could be from our data and research.

Fast forward to today, and we closed our second round of funding. Many in the startup community have asked how I am able to raise a baby, mother four young children and raise funding. I understand the question. Founding a startup is hard. It takes 100 percent of your focus; you have to be all in with your time, your talent and your treasure.

The raised eyebrows, perplexed looks and voiced disbelief as to how I can juggle it all as a female entrepreneur and mother of five originally left me feeling like I needed to defend my life and my ability to manage it well. After a few months of these constant questions, I stepped back and thought, “Danny is never asked the same questions. No one ever asks how he does it all as an incredibly engaged father of five, a coach, a room parent and a school auction chair.â€ There is this misconception that motherhood, or at least young motherhood, is mutually exclusive from founding a startup. But as a mother myself, I couldn’t disagree more.

Women in Tech by the Numbers

However, there is progress. Many venture firms buck these trends by surpassing the global averages. Between 2010 and 2015, 54 venture firms surpassed the aforementioned average of 10 percent, and 51 firms surpassed the seed/angel average of 17 percent. Furthermore, in 2009, 9 percent of funded startups had at least one female founder. In 2014, that percentage doubled to 18 percent.

According to the CrunchBase report, successful startup founders are between the ages of 24 and 31, butÂ recent data shows that the average age women first give birth isÂ 26.4 years old. This adds another layer of complexity for women.

Motherhood is a well-known obstacle for women in tech, asÂ recent press surrounding egg-freezing as an employee benefit indicates. Recent articlesÂ highlight the struggle female startup founders face while believing they can build their company while building a family. AndÂ Michelle Budig, author of “The Fatherhood Bonus and the Motherhood Penalty,â€ found that working mothers are perceived to be “more distracted and less productiveâ€ since they have children for whom they need to provide, while working fathers are believed to be more stable.

These antiquated notions of male and female roles at home and in business must be overcome. Tech startups should be just as forward-thinking and disruptive in breaking outdated cultural norms as they are in creating the next big technology.

While the numbers may not be in my favor, I believe working mothers have much to bring to the table. Many mothers (and parents in general) rely on the unique skill sets that come with having a baby: the ability to multitask, to work all hours of the day without needing a break, to focus on numerous tasks simultaneously, and to have no option but to do them all with excellence.

Before I had kids, I was working for me. I had aÂ love for the game and wanted to advance in my career. Now, I recognize there is no room for failure. I have five mouths to feed and five little humans looking up to me for all I do. I have to succeed. That drive only came to me by being a mother.

Plus, young women make for ambitious entrepreneurs, even if there are fewer of them. According to the 2016 BNP Paribas Global Entrepreneur report, which surveyed 2,600 high net-worth entrepreneurs from 18 countries, female founders of child-bearing age are outperforming their male counterparts. Nearly 90 percent of female entrepreneurs expect their company’s gross profits to rise or remain stable in the next 12 months. Seventy-five percent of millennial female founders also expect their profits to rise. Furthermore, female entrepreneurs between the ages of 22-34 reported higher revenues – 22 percent above the overall male/female average.

Founding a venture-funded startup is a daunting task, even for a male serial entrepreneur with no children. Taking the first step is the only way to start. It won’t be an easy road, but there is plenty of support from fellow female founders out there.

More than ever, female founders need to showcase that it can be done, as it’s our responsibility to mentor fellow mom entrepreneurs and ensure our ranks keep growing. The landscape is changing, and we need more women among our #FemTech ranks! Sixty-four percentÂ of female entrepreneurs have a history of entrepreneurship in their family. You are leaving a legacy for your children that is far greater than your startup.