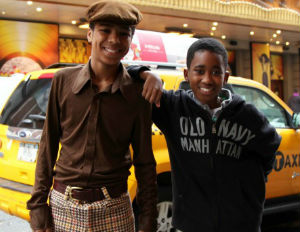 It’s one thing to take on your first Broadway performance, but can you imagine doing it at the age of 12 while portraying music legends such as Michael Jackson, Stevie Wonder and Motown founder Berry Gordy. Well, Raymond Luke Jr. and Jibreel Mawry are taking on the roles of the icons at a young age in the latest Broadway show, Motown: The Musical.

Focused on “Motown’s first 25 years through the eyes of Gordy and is punctuated with a stunning collection of vintage hits and energetic dance numbers,â€ say thegrio.com. And coming from opposite ends of the country–Mawry from Los Angeles and Luke from Detroit–the two beat out several hundred kids across the country looking to take on such aspiring roles.

“It’s a big step,â€ Jibreel said backstage at the Lunt-Fontanne Theatre. “We went from local performances around town to Broadway.â€ After hours of studying footage of Michael Jackson’s mannerisms and movements, Raymond says, “Michael is someone who felt the music. He WAS the music,â€ says Raymond. Jibreel chimed in to add, “He was always so smooth onstage. He held back when he was offstage, but then when that spotlight hit him onstage, he was a whole different person.â€