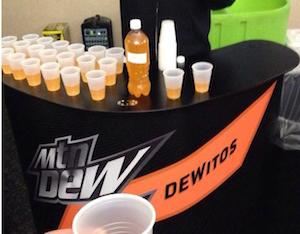 Mountain Dew has had its fair share of crazy flavors, but its latest may have taken the top notch.

PepsiCo Inc., the parent company of Mountain Dew soda, is creating a brand-new flavor that will taste like cheesy Doritos. The company released a statement last Friday in which found the soda and snack company dubbed the new flavor “Dewitos.â€

The product was tested on college students. One, a Reddit user who goes by the username joes_nipples, posted an actual photo of the taste test on Friday, admitting that the soda did, in fact, taste like Doritos. This isn’t the first time that PepsiCo has taken the highly caffeinated soda and mixed it with cheese-encrusted nacho chips.

The company has long had a history of linking its soda drink and chip company brands through the creation of new flavors or in curating joint promotions. Microsoft’s Xbox, which recently celebrated the year one release of the Xbox One, has benefited from propagandizing video game culture in marketing campaigns.

Bags of Doritos and bottles of Mountain Dew can be used to unlock gear and earn points in Call of Duty: Advanced Warfare, which was released this week. While there’s no official word from PepsiCo about whether or not this Doritos-flavored soda will hit stores nationwide, the combination may just be a trending topic worth checking out.

Would you try out this flavor that tastes like liquid cheese?! Speak on it in the comments section below!