Ahh, it’s officially summer. Soon school will be out—and a lot of kids will be losing up to three months of learning.

Summer is traditionally a time of summer reading lists—but have you ever heard of a summer math list? I haven’t. I’ve also heard of bedtime stories, but never bedtime math.

Until yesterday, when I read an article that mentioned Bedtime Math, a free app geared to kids 3 to 9 designed to help parents and kids talk about numbers and math in an engaging, fun way.

Here’s an article from The Hechinger Report that explains this appealing way to learn and reinforce math concepts:

For many families, reading is as much a part of summer as cookouts and camp. But as the weather warms, math is often banished along with mittens and sweaters. And that’s a problem.

Studies of “summer math loss” find that the average kid forgets more than two months of math over the break. The numbers are worse for lower-income students, and those losses pile up, contributing to math achievement gaps.

Can education technology help put the brakes on summer backsliding? Early research on summer math-practice apps suggests they come up short. Maybe we’d have better luck using tech that changes how kids and their families relate to math all year round.

That’s Laura Overdeck’s vision. She’s the founder and president of Bedtime Math Foundation, which offers a free app to help families “make nightly math as common and beloved as the bedtime story.”

The Bedtime Math app, launched in 2012, spurs family math talk by sending parents daily word problems prefaced by a paragraph of story—about everything from subway-riding dogs to galactic travel—illustrated with a photo or video.

Parents and kids choose from four related math questions that progress in difficulty – from counting and pattern completion to multiplication and division. There’s a “sky’s the limit” challenge question that may tap algebra or geometry, but the app is geared to kids aged 3 to 9.

The Bedtime Math parents interviewed for this column said they kept using the app because their kids requested it. “If my wife and I had a date night, or a party, or some other engagement, my daughter would make sure we forwarded the link to our sitter,” said Ajay Shroff of Summit, New Jersey.

“My husband and I love numbers,” said Overdeck, who has a degree in astrophysics and an M.B.A. Her husband, John, majored in math and statistics. “Math is like dessert at our house.”

Before Bedtime Math was an app, it was the Overdecks’ nightly routine with their children. When their oldest was 2, they started to work numbers into the bedtime stories. They’d count stuffed animal eyes and noses, for instance, and eventually started dropping basic addition and subtraction into playful stories they’d make up on the spot.

When their second child was 2, he started to demand his own math problems when tucked in at night. Eventually other parents in their community of Short Hills heard about this, and Overdeck agreed to email them some bedtime math stories they could tell their own kids.

“I emailed 10 friends in town, and within a week the list had doubled,” Overdeck said. It grew so fast that she quickly moved from emailing to posting math stories on Facebook, and then tweeting them, before launching the app, which hundreds of thousands of parents have since downloaded.

Overdeck has kept the app simple. There are no fancy graphics, sound effects, scores, rewards, or other gamification gewgaws.

“Once you start scoring, you risk kids feeling like they’re being judged. You’re right back in school,” she said, and she insists that Bedtime Math is for parents and kids, not for classrooms. “The whole point of our brand is to signal to kids that there’s fun math out here in the world outside of school.”

So far, it seems to be working. In a 2015 Science study led by University of Chicago psychologist Sian Beilock, nearly 600 first graders signed up for “Bedtime Learning Together,” a disguised version of Overdeck’s app that allowed a portion of families to get literacy questions rather than math problems with their daily stories. After a year, students whose families got the math questions outscored those in the literacy group by an average of nearly three months of math achievement.

Admittedly, this was a school-year study, not a summer one. The other caveat concerns demographics. While the students in the study hailed from diverse backgrounds, they skewed affluent, and the real challenge of summer slide is among lower-income students.

A Johns Hopkins University study following nearly 800 Baltimore students for several years found that lower- and middle-income students progressed academically at a similar rate during the school year, but the lower-income kids fell further behind each summer. By ninth grade, about two-thirds of the achievement gap between them and their more affluent classmates could be explained by an accumulation of summer learning loss.

Overdeck and her team have worked to spread Bedtime Math beyond affluent communities. Last fall, she partnered with the Newark, New Jersey, public schools to pilot an introduction of the app to families in six elementary schools via parent-teacher conferences. About 20% of those parents downloaded the app, which encouraged Newark Superintendent Christopher Cerf to green-light the app’s introduction at parent-teacher conferences in all the city’s elementary schools this fall.

“Once we can link usage stats to individual students, then we can look at things like summer learning loss,” said Cerf. (Individual student data would come from questionnaires; it is not collected by the app.) “But I would be pretty surprised if regular users did not see a greater carryover from year to year of their math progress.”

Educators urge parents to weave more “math talk” into everyday family activities—from setting the table to baking a cake. Still, many people need a nudge to talk about math with their kids. Parents often see math as strictly the school’s domain, and they’d be relieved to keep it there, because math makes them nervous and insecure. Studies suggest that up to 25% of college-educated Americans suffer from moderate or severe math anxiety.

Overdeck caught a glimpse of that when several of the parents she first emailed math stories—all successful, college-educated professionals—wrote to ask her to include the answers in the next batch. She did. The answers are provided in the app, too.

Math anxiety loomed large in the Science study. Beilock’s team compared the data from children with more or less math-anxious parents (based on an initial survey). In families with parents low in math anxiety, Bedtime Math didn’t do much for math scores unless it was used at least twice a week. But kids with the most math-anxious parents only had to use the app once a week for math gains equal to half a school year.

To Overdeck, these findings suggest that the app sparked more math talk in these homes all the time, not just with the app itself. Beilock and her team are still following the children in the Bedtime Math study as they transition from one grade to the next, but she can’t speak about the new data until a paper is prepared for publication.

“If this app is changing how parents interact around math, then you could imagine it could be beneficial at a time when kids are not in school,” Beilock said. “That would just be speculation. But I think it’s fair speculation.”

This article was originally published on The Hechinger Report. 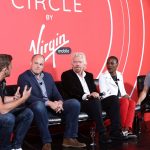