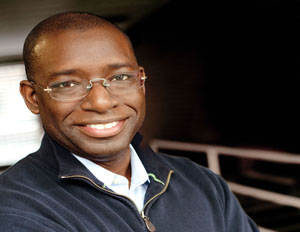 Movie theaters sold an estimated $10.84 billion worth of tickets domestically in 2012, and MoviePass CEO Stacy Spikes hopes the blockbusters that contributed to that total will also lead to significant revenues for his company.

MoviePass, an app and movie theater subscription service, was founded by Spikes, who also launched the Urbanword Film Festival in 1997. BlackEnterprise.com spoke with Spikes about his newest venture and the convergence of technology and entertainment. Here’s what he had to say:

BlackEnterprise.com: Tell me a little bit about MoviePass and how it works.

Spikes: MoviePass is a subscription service for going to the movies. Â A person would pay a flat monthly fee and they can go to a movie a day and virtually about 95% of theatres nationwide.Â  The way the user experience will work is you download the app and you get a reloadable card and you would check into a theatre that you want to go see a movie at and you pick the movie, the show time and the app.Â  Then once you’re done that it will say, congratulations go ahead and purchase your ticket and you’ll go to the kiosk at the counter and buy the ticket to the movie that you want to see.Â Â  It’s that simple and you can see a movie a day.

How exactly does the business make money?Â  Is the only income source from subscriptions?

Spikes: No, we basically are going to have four revenue streams.Â  We have subscription, we have advertising, we have data and then we have cell groups.Â  So is you were imagining we were Disney, they’re not living off ticket sales, it also had products and other ancillaries. Usually people that buy those ancillaries are the same people who saw the movie. That relationship is where we’re able to offer DVD, Blu-ray, soundtrack, books, graphic novels. So instead of a business they have to wait for you to walk through the doors, say do you have that soundtrack?Â  Or do you have that Blue-ray?Â  Or do you have that … we know what you saw, we are able to offer you things, do things intelligently because you have that first relationship with the consumer now.Â  So that’s really the difference.

Roughly how many subscribers do you have as of right now?

Spikes: I’d love to tell you. We haven’t released the number of users that we have.

Tech and entertainment is so intertwined that it’s going to be hard to mention one without the other.

So do you see MoviePass as a way of getting individuals into the theaters who might otherwise simply wait to see the movies on DVD?

Spikes: Absolutely, we increase movie attendance amongst our members by 64%. We increase concessions by 123%.Â  So we already see it making a radical difference even if that number is half, even if it’s a third of what we currently do.Â  Could you imagine this business at scale?Â  That would radically change our business overall.Â  The movie industry is a little like the airline industry.Â  The problem is the plane is flying empty 97% of the time. You just have Friday, Saturday and Sunday nights where, okay you’ve got a full plane. All that other inventory … you go to the movies in the middle of the day it’s an empty theatre.Â  They’re trying to do things to increase that traffic.Â  Well with movie pass we found that we doubled mid week behavior. So could you imagine doubling mid week attendance in those theatres that are virtually empty?