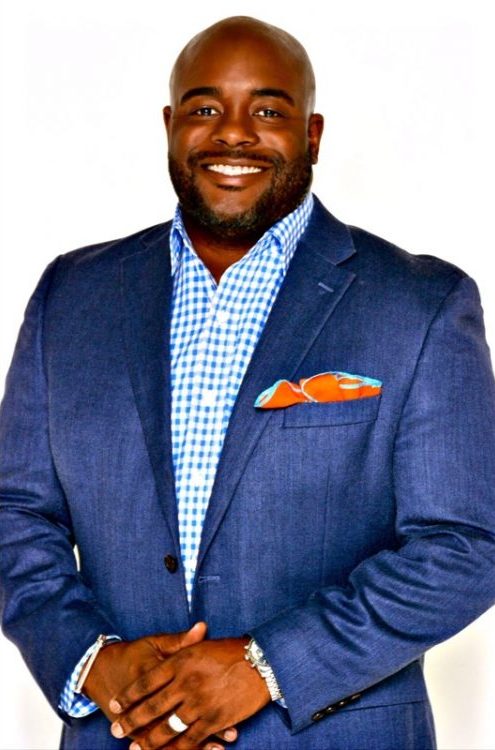 One Word That Describes You: Innovative

It’s incredibly humbling. I remember visiting the grocery story with my family and admiring the folks on the BE covers while waiting in line. I would see the most put-together brothers and admire and dream of one day being in a position where my hard work might be recognized in a similar fashion. Being part of the BEMM Men of Distinction, in this impressive collection of accomplished men of color, is both humbling and overwhelming. I am so grateful for this opportunity.

For me it all starts with family. I have a rising junior at North Carolina A&T State University, who I am immensely proud of for the work he is doing. For a number of years, I have also been a mentor to students in the DC Public School System. Of late, one of the most exciting things I’ve done is to partner with HBCUs and their students as we look at innovative ways to support our studios in diversifying the film and television creative pipelines. Just a few months ago, we hired two male cinematography students from Howard University to capture my Q&A with noted director Amma Assante after a VIP screening of her latest film, A United Kingdom. Before that, we also had these talented young men film my interviews with the cast of Moonlight, following an MPAA screening. To provide them access to an award-winning director and to be part of a program in the storied MPAA Theater was an amazing opportunity for them.

Overcoming bureaucracy and inertia by persuasion and joining with like-minded allies. Asking for forgiveness instead of permission; however, if you’re successful you rarely have to ask for forgiveness.

How do you ordinarily impact?

By being accessible. Although the MPAA is the face of the American film and television industry, we don’t operate in the creative space that our studios do. Given the heightened focus on diversity and inclusion, I’m constantly fielding calls and emails from creators of color from all over the United States seeking guidance on the best ways to navigate the industry.

Authenticity. Given the nature of how Washington and Hollywood work, surrounding myself with authentic and genuine people is a must. In politics and entertainment there’s this drive to get ahead at any—and all—costs sometimes. We’ve all been in situations where you’re engaging with someone, yet they’re looking past you for the next “it person” to walk in. It’s really fascinating to observe, but I will always choose the folks who are as content to be around me as I am with them. Genuine relationships are a rarity so you must treasure them.

I’m always working on ways to highlight inclusion and representation in film and television. I head to Los Angeles in a few weeks to meet with a number of our partners to plan some fourth quarter programming. However, my immediate focus areas are Films at the Rock, our summer film series that we host on the National Mall with the Martin Luther King Jr. Memorial Foundation; sponsorship of the opening night film at the Urban World Film Festival in New York; MPAA/Icon Talks ICON and Visionary Awards in Washington to kick off the Congressional Black Caucus Foundation’s Annual Leadership Conference; sponsorship of the Georgia Latino Film Festival; and programming with our partner Southern University and A&M College in Baton Rouge, Louisiana.

I have the great fortune of working alongside one of the true political giants of our time, former Senator Chris Dodd. While I consistently learn a great deal from him, the best advice he’s shared is the importance of relationship building. When I started our Inclusion and Multicultural Outreach Program, there were a number of groups that were somewhat suspicious our efforts; however, over time and due to constant engagement, they are now not only supportive but fans of our efforts.

To stay on your path. While others may have suggestions and unsolicited advice, I always say stay true to you. There is no need to accelerate or deviate because of the opinions of others. Once the fruition of the hard work comes forth, you’ll know any detours and bumps were well worth it.

I’m always up for briefings and more briefings. I think that’s the government background in me. We typically do countdown meetings and/or calls before every major programming initiative. When I’m speaking before groups I’ll do a considerable amount of research beforehand.

I’ve enjoyed some pretty amazing trips around the world but spending two weeks in Spain with several of my closest friends has been the highlight thus far. We ran with the bulls in Pamplona, basked in the splendor of San Sebastian, and then we closed out the fun in Barcelona. I’m planning a return for next year.

Italy without a doubt. One of my favorite films is The Talented Mr. Ripley and those locations just blow me away every time I see it. If I could, I’d definitely have a home on the Amalfi Coast. One of my closest friends runs a cooking program in Tuscany and I’ve yet to visit. Next on the list.

I encourage those with a passion for storytelling to tell their stories, as we desperately need to hear them. As a society, we all benefit when a wide array of diverse stories are told. While change is indeed occurring, I still have a great deal of work to do. Thanks again to BE for allowing me to share part of my story.