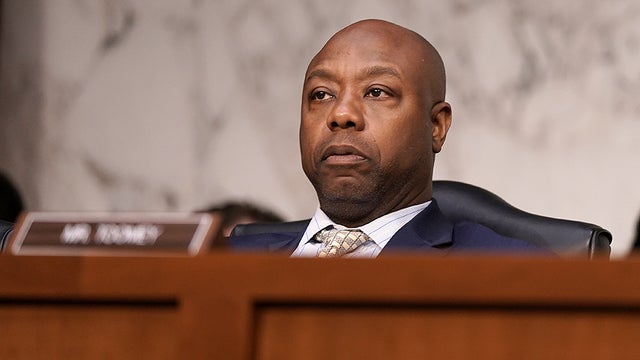 MSNBC host Tiffany Cross essentially agreed with social media regarding Sen. Tim Scott’s comment on America not being a racist country – his name ought to be  “Uncle Tim.”

Related stories: BLACK REPUBLICAN TIM SCOTT SAYS AMERICA IS NOT RACIST, THEN IS SHOCKED AT BEING CALLED UNCLE TIM

“Tim Scott does not represent any constituency other than the small number of sleepy slow-witted sufferers of Stockholm Syndrome who get elevated to prominence for repeating a false narrative about this country that makes conservative white people feel comfortable,” Cross said. Images of Candace Owens and Pastor Derrell Scott appeared when she spoke about “Uncle Tim’s” Stockholm Syndrome.

Her insults got deeper as she further implied that ‘Uncle Tim,’ a reference to “Uncle Tom,” a happy slave, rose to Republican prominence from cotton picking to eventually become a “clown” along with “tap dancer” and “token.”

“Please, senator, say more about how un-racist the country is, while you trot out that tired line about going from cotton to Congress to clown,” Cross said.

“Perhaps, this was merely Sen. Scott’s audition to be Sam Jackson‘s understudy in the film Django because, as a descendant of the enslaved and damn near a daily survivor of institutional racism, I can assure you the question, ‘Is America a racist country?,’ is one that has been asked and answered many times over, yet we still love America not for what it was but for what it could be,” Cross said.

As BLACK ENTERPRISE reported, Scott gave a 15-minute speech in response to President Joe Biden’s first address to Congress, calling him a good man but one who is dividing the country by pursuing major legislation. Scott also gave credit for the coronavirus recovery to former President Donald Trump.