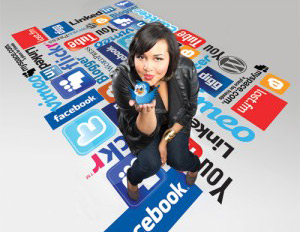 With the TV industry struggling to retain audiences, networks and award shows specifically are incorporating social media technology into their broadcasts, in an attempt to boost ratings by creating a more interactive program. This weekend, social media analysts will be watching carefully to see how well this year’s MTV Video Music Awards will continue the trend. “[Award shows are] absolutely capitalizing off of social media,â€ says Stephanie Humphrey, Technology Correspondent for YourBlackWorld.com. “You’re getting more eyes on your programming if [a Twitter user] uses #ChrisBrown and their friends see it and retweet it, or remember to themselves, ‘Oh, the BET Awards are on tonight; let me go turn on the TV!’ It keeps people connected. People aren’t always at their couch. I can be at the library or work and check in and see who just won ‘Best Artist’ through Twitter.â€

“The BET Awards this year was the most impressive with its social network tie-ins,â€ Humphrey continues. “Ford hosted the social media lounge at the show, and there was a contest for Twitter users who used the given hash tag–the winner won a new Ford Focus!â€

BET and Ford both garnered publicity and viewers, not to mention amassed more Twitter followers for subsequent marketing schemes. A winning situation for all involved. So it should come as no surprise that award shows, corporations, and networks alike are integrating social media to the extent that they are. This past year, MTV even went as far as to hire Gabi Gregg as its first “TJâ€ (Twitter Jockey) to capitalize on the medium’s reach.

“TV is in the business of attention,â€ says James Andrews, a digital communications/content strategist, who directed the social media strategy for the Grammy Awards. With Andrews’ help, the show garnered their best ratings in over a decade–over the course of three hours, a staggering 90% of Twitter conversations mentioned the Grammy Awards. “TV is about how many eyeballs you can steal; how much attention can you provide and produce to take those eyeballs away from somewhere else and have them focus on whatever it is you’re doing,â€ he says. “MTV does it well; BET has been integrating more recently, but The Grammy’s ability to think of communication as a story arch is really what sets them apart.â€