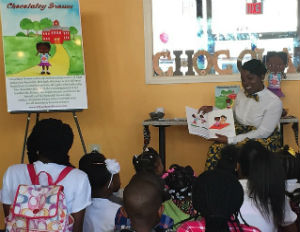 March 2 was National Read Across America Day, but every day is a good day to read a good book.

[Related: Save For Your Kids’ Education Without Panicking]

There are tons of great children’s books available. Unfortunately, there aren’t many that are explicitly multicultural, that is, that include illustrations of diverse people or that feature main characters of color.

According to the Washington Post, in 2012, theÂ Cooperative Children’s Book CenterÂ reviewed 3,600 children’s books. They found that 3% were about African Americans, 2% featured Asian and Pacific Islanders, less than 2% featured Latinos, and less than 1% were about American Indians. How many at least showed illustrations of diverse people is unknown.

When my children were small, we read a lot of books, from The Snowy Day to Misty of Chincoteague to Black Beauty to the Chronicles of Narnia, the beloved Little House books to the Anne of Green Gables series to the Dark Is Rising Sequence to Lord of the Rings to The Giver to the hilarious Tin Tin comics. We also read some wonderful lesser-known books like Vero and Philippe (about a Vietnamese girl living in France) and the Power of Un. We read great stories that were full of imagination. We didn’t limit ourselves to books about brown people.

But I remember being a third- or fourth-grader and seeing for the first time a book about a “coloredâ€ girl–and I fell in love with that book. I can’t remember its title, but the text had a gospel-like rhythm, and I recall illustrations of a brown-skinned girl in a flowing white dress. Something in that book spoke to me deeply.

A new addition to the multicultural canon is Up On My Tippy Toes, by Dr. Linda Sturrup, a doctor of dental surgery. For parents who want to encourage their young children to persevere in the face of difficulties, this picture book just might fit the bill.

It tells the story of a young girl who, after seeing a performance of the Nutcracker, is inspired to begin ballet lessons, but finds that dancing isn’t as easy as it looks. Her mother points out how effort has paid off in other areas of her life, and the little girl makes the connection.

The book’s main character, Natalie Jean, and many of the other people are depicted as African American, but Natalie Jean’s ballet class is racially diverse.

Although ballet is a theme of the book, your youngster doesn’t need to be a ballerina, or even a girl, to appreciate its message that success is won by effort and application–a lesson you’re never too young to learn.

Up On My Tippy Toes is available at Amazon.com.