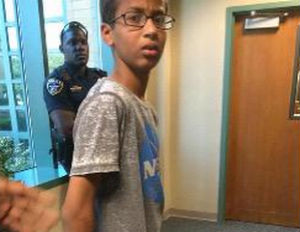 A 14-year-old boy was arrested by Texas police after a homemade clock brought to school was mistaken for a bomb, according to reports.

Ahmed Mohamed told reporters that he had made a clock at home and brought it into MacArthur High School in Irving, Texas, to show his engineering teacher. Another teacher, upon seeing the clock, thought it was a bomb andÂ alerted school authorities, who called the police.

At a news conference Tuesday morning, Irving Police Chief Larry Boyd said charges won’t be filed against the teen. Boyd said the device was “certainly suspicious” in nature. “The student showed the device to a teacher, who was concerned that it was possibly the infrastructure for a bomb,” Boyd said.

Mohamed was questioned by school officers about the device and why he’d brought it to school. Boyd indicated Ahmed was then handcuffed “for his safety and for the safety of the officers,” and taken to a juvenile detention center. He was later released to his parents, Boyd said.

“The follow-up investigation revealed the device apparently was a homemade experiment, and there’s no evidence to support the perception he intended to create alarm,” Boyd said.

During the news conference, Boyd touted the “outstanding relationship” he’s had with the Muslim community in Irving. Mohamed’s father, however, did not agree, fearing at the time of his son’s arrest that the incident happened because of his son’s Muslim background.

Boyd said he talked to members of the Muslim community Tuesday and had plans to meet with Ahmed’s father later today. When asked if the teen’s religious beliefs factored into Mohamed’s arrest, Boyd said the reaction “would have been the same” under any circumstances.

A viral hashtag has been sparked, #IStandWithAhmed, with Twitter users offering words of kindness and speaking out against what they see as discrimination and targeting.

Mark Zuckerberg- “If you ever want to come by Facebook, I’d love to meet you. Keep building.” #IStandWithAhmed pic.twitter.com/EU64r7gq00

#IStandWithAhmed because I don’t ever want any of my students to be told that their imagination is criminal.

In a previous case of a similar nature, an African American teen in Florida was arrested for a science experiment that caused a small explosion in her school in 2013. Kiera Wilmot was taken into custody by a school resources officer and charged with possession/discharge of a weapon on school grounds. She was expelled and told she would be tried as an adult. Criminal charges were subsequently dismissed, and Wilmot was able to graduate high school and move on to attend Florida Polytechnic University last fall. She said, in a later interview, that though she was exonerated, the felony charges still haunt her and, “the lawyer says it takes five years to clear each felony off the record.”

Have school officials and administrators gone too far in seeking to ensure school safety, especially in light of tragic incidences of terrorism and violence in recent years? Share your opinion below in the comments.