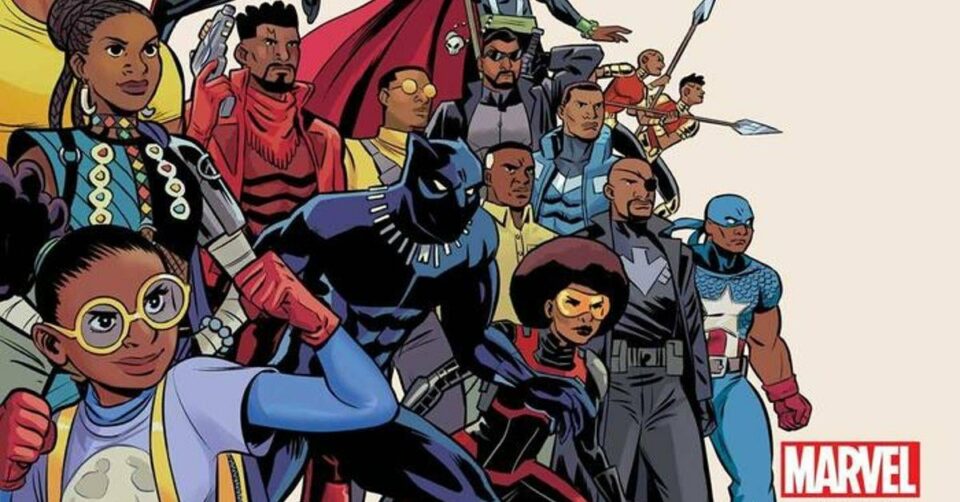 Marvel Comics will release a new non-fiction book, My Super Hero Is Black, that will revive and illuminate many of its significant Black characters and creators.

The project is presented by John Jennings, the notable comics scholar and #1 New York Times bestselling author, and Angélique Roché, the acclaimed producer and host of Marvel Entertainment’s Marvel’s Voices podcast, in collaboration with Marvel and Gallery Books Group, a division of Simon & Schuster.

“Angélique and I have endeavored to create a love letter to the characters we hold dear, a celebration of Black characters and creators in the vast Marvel Universe, and a document for future generations to come,” Jennings told EW.

My Super Hero Is Black invites comic fans and storytellers on a celebratory journey into the historical overview of the Black Marvel universe. From Stan Lee’s early efforts at addressing systemic racism to the revolutionary work of Black creators like Ta-Nehisi Coates and Billy Graham, the book will include accounts from prominent Black creators and luminaries about their personal relationships with Marvel superheroes.

Jennings added, “My Super Hero is Black is not just a reference book but it shows the potential of these amazing Black characters through new windows and new vantage points. We hope that audiences are as thrilled to experience the spectrum of representations of Blackness in My Super Hero Is Black via the lens of the universe that is Marvel Comics as we are.”

“The narrative of the Black superhero, its impact on individuals, and how it has evolved in our country—and around the world—tells not only an amazing, entertaining narrative of fictional stories but reflects the real-life complexities of Black representation in media,” Roché said. “As lifelong genre fans, John and I have taken great care to craft not just a historical reference but a narrative that highlights a journey of Black superheroes past, present, and future.”

My Super Hero Is Black will officially go on sale October 11, but can be pre-ordered from Simon & Schuster.