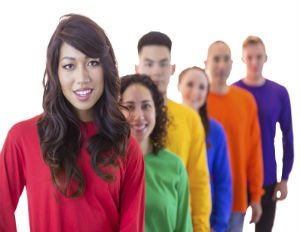 June is officially Pride Month and My True Colors Festival: Fighting for Social Justice and Cultural Diversity Through the Arts is presenting a lineup of artistic works for, about, and by LGBTQIA+ (lesbian, gay, bisexual, transgender, questioning, intersex, asexual) storytellers and communities of color. Now in its second year, MTCF is an official NYC Pride Partner and multidisciplinary arts events taking place June 10—26, 2016, in Brooklyn, New York. MTCF will kick off on June 10 with a festival buzz party in celebration of Pride Month co-hosted by the local organization GMAD (Gay Men of African Decent).

This year’s festival is comprised of some 35 plays, live performances, narrative feature films, documentaries, shorts, webisodes and special presentations. A main stage event will be held on June 17 as a part of MTCF’s conversation series: Film and Television Producer Nathan Hale Williams Talks “Dirty Laundry.â€ This special screening, talkback, and reception with the prolific creator of stories centering on gay men of color coincides with the 10-year anniversary of Dirty Laundry. The NAACP Image Award and GLAAD Media award-nominated film for which Williams served as executive producer. Currently, he is in pre-production for the film, The Second Act, which he co-wrote with actress Jenifer Lewis (ABC’s black-ish). On June 23, Williams will lead a workshop on the “Art of Storytellingâ€ followed by a book signing of Ladies Who Lunch & Love, a novelization of the popular ESSENCE magazine column where he gave love, relationship, and spiritual advice for years. Williams also is the national spokesperson for the CDC’s 2016 “Doing Itâ€ campaign aimed at reducing HIV rates in the black community by encouraging testing and treatment.

Festival highlights are “The L Word 3.0,” a day of programming (June 20) dedicated to women, including the screening of Suicide Kale by Brittani Nichols, a comedian and actress (Transparent), who wrote, produced, and starred in this feature about two queer couples. Another day of programming (June 22) has been designated as “T-Day,” featuring screenings and talkbacks relevant to the transgender community, including the Spanish-Cape Verdean documentary Tchindas about the trans community in the Cape Verdean islands, presenting a side of Africa that is all too rarely seen.

Returning to the main stage on June 24 is a special performance of B-Boy Blues The Play, a theatrical adaptation of James Earl Hardy’s bestselling novel–a gay hip-hop love story that unfolds when a middle-class Ivy League journalist meets a working class bike messenger. Living and writing as a gay black man, Hardy will be on hand in honor of NYC Pride for a talkback discussing 20 years since his book debuted.

“Work from artists across the country and the world round out our 2016 lineup, exploring and exemplifying the festival’s theme and this year’s NYC Pride theme–Equality Needs You,” says MTCF Co-Founder and Executive Producer, Tai Chunn.