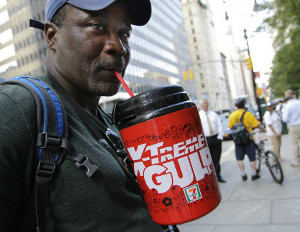 Opponents of New York City’s limit on the size of sodas and other sugary beverages have questioned if the law is constitutional.Â  Now questions are being raised about the racial aspect of the limit on beverage sizes.

The New York State Branch of the NAACP and the Hispanic Federation has joined with beverage sellers in an attempt to stop the rule from going into effect on March 12. At a hearing set for Wednesday, they plan to point out what they have deemed “inconsistent and undemocratic regulationâ€ regarding the controversial law.

The NAACP and the Hispanic Federation, a network of 100 northeastern groups, both agree something has to be done about obesity levels in the city, especially among blacks and Hispanics. However, they’re concerned that the soda ban will harm minority businesses and shoppers in low-income communities.

“This sweeping regulation will no doubt burden and disproportionally impact minority-owned businesses at a time when these businesses can least afford it,” they said in court papers. They say the city should focus instead on increasing physical education in schools.

Both groups point out that the soda ban applies to bodegas and Korean grocery stores, often the only place to purchase food in low income neighborhoods, while supermarkets and convenience stores are excluded. 7-Eleven, home of the 50 ounce Double Big Gulp, is not regulated by state law, neither is Starbucks and Dunkin’ Donuts because their drinks contain dairy.

The NYC Board of Health passed the soda ban in September. Officials cited the city’s rising obesity rate–about 24% of adults, up from 18% in 2002–and pointed to studies linking sugary drinks to weight gain. Care for obesity-related illnesses costs more than $4.7 billion a year citywide, with government programs paying about 60% of that, according to New York City’s Health Commissioner Dr. Thomas Farley.

“It would be irresponsible for (the health board) not to act in the face of an epidemic of this proportion,” the city says in court papers.

The National Association of Local Boards of Health and several public health scholars have backed the city’s position in filings of their own.