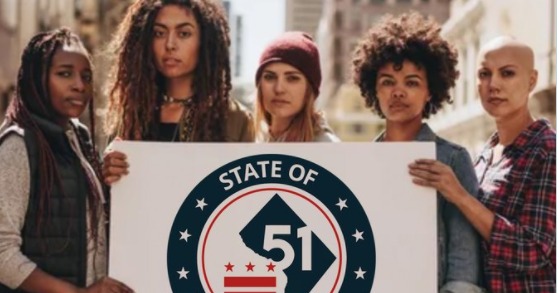 The NAACP and Planned Parenthood are among D.C. statehood supporters who penned an open letter to Congress. @NAACP- Twitter photo credit

An open letter to Congress was signed by the head of the NAACP,  Planned Parenthood, and hundreds of prominent women of color who are in support of making Washington, D.C. a state, while stating that that the issue is related to racial justice and public health.

In a press release, the NACCP said that the open letter notes a number of ways the District’s lack of autonomy has put its residents’ health at risk. Attorney and television personality Star Jones; political strategists Donna Brazile, and Rev. Leah D. Daughtry; Beverly Evans Smith, the 2017-2021 National President CEO for Delta Sigma Theta Sorority, Inc.; Angela Rye, principal and CEO of IMPACT Strategies are some of the letters’ signers.

In part, high maternal mortality rates of Black residents was referenced in the letter in addition to the distribution of vaccines amid the pandemic.

“As the country works to distribute vaccines and end the COVID-19 pandemic — which has devastated Black and Latino communities with higher infection rates, death rates, and job losses — the District’s lack of autonomy has put residents’ health at risk. Large proportions of D.C.’s vaccine allotment has gone to federal agencies and to non-residents while Black residents are going without,” the letter said. “While D.C.’s Black residents have accounted for nearly half of  COVID-19 cases and nearly 70% of deaths, they’ve received only 37% of vaccines.”

Toward the end of the letter,  denying the people of Washington, D.C. representation in our democracy was described as having always been ‘morally reprehensible.’

Since the U.S. House of Representatives passed H.R. 51 last week, signers of the letter want the U.S. Senate to take the next steps to make D.C. Washington, Douglass Commonwealth and pass the bill. CBS reported that if D.C. does gain statehood as the 51st state, it would have one seat in the House and two Senators to represent its population of approximately 700,000 people.