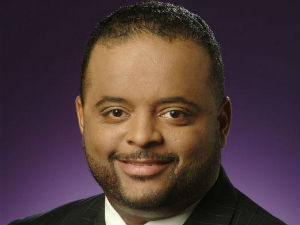 Roland S. Martin will serve in a special advisory role for the National Association of Black Journalists.

The National Association of Black Journalists on Friday named CNN analyst Roland Martin as Honorary Chair of its 2013 national convention, to be held in Orlando, Florida from July 31 to Aug. 4.

NABJ said Martin, host of TV One’s Washington Watch, will assist the organization in the months leading up to the convention and serve as an advisor to organizers of its marquee events. A spokeswoman said Martin’s national profile would also be instrumental in helping NABJ recruit new sponsorships.

“Roland is a committed member of NABJ who always supports our programs and services. We know he will have great ideas to make this year’s convention in Orlando very memorable,” said president Gregory Lee, executive sports editor of the South Florida Sun-Sentinel.

“I am honored and humbled to serve as the honorary chair of the 2013 NABJ convention in Orlando,â€ said Martin, a lifetime member. “Nearly every job I’ve held can be traced back to the people I’ve met through NABJ. It is a vital organization to ensure that we expand the opportunities for Black journalists in all professional media companies.”

Martin, who was formerly the organization’s national secretary and student representative, told Black Enterprise in an email that he would not be running for president of the organization.