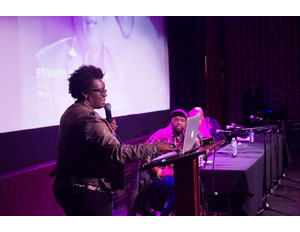 The hackathon tested the skills of developers over a two-day period. The participants are all developing TV and Web series. The goal of the hackathon was for them to create a companion app to the series they are developing.

The jury awarded a $3,000 prize to Sultan Sharrief and Oren Goldenberg, producers of the TV series Cred;Â a reality show about 12 Detroit high school students trying to land a dream internship in the film industry. Sharrief and Goldenberg created theÂ Street Cred Movie Mogul app, which lets users build a film company with the goal of becoming a movie mogul.

An Audience prize of $1000 was awarded to Damon Colquhoun, producer of Pixie Dust–a Web series about a girl who uses her magical powers to help her mentally ill mother. His app, Pixie Dust: Home to Mom, challenges users to try and safely wade through a world of unsavory characters who threaten Pixie’s mental health. The app was designed to create awareness about triggers that can threaten mental well-being.

Prizes of $500 were awarded to the makers of POPS, a Web documentary that seeks to dispel myths about black fathers. The companion app, POPS+LIFE, is a scavenger hunt app that lets children and their fathers work to explore and solve various missions.

The producers of Black Broadway on U–an interactive Web project about the U Street corridor in Washington D.C., also received $500 for their companion app Duke’s DC: Just Jumpin’ and Jivin;’ another scavenger hunt and quiz app that takes users on a walking tour of dance halls, theatres, and nightclubs that were frequented by the likes of Duke Ellington.

NBPC is a Harlem-based media arts organization and Silicon Harlem is a social venture focused on transforming Harlem into a technology and innovation hub.