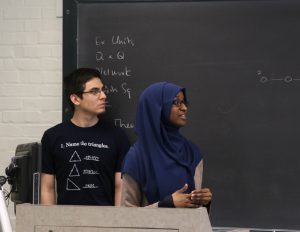 Have you heard of REU? Until recently I hadn’t. Research Experiences for Undergraduates is an extraordinary program of the National Science Foundation that provides research opportunities for students in a range of areas—from STEM to the social sciences.

Students from underrepresented groups, including students of color and women, are urged to apply.

I recently spoke with Eugene Fiorini, Ph.D., Truman Koehler Professor of Mathematics‌‌ in the Mathematics and Computer Science Department at Muhlenberg College in Pennsylvania. Muhlenberg is a new REU site.

“The idea is to introduce students to what it would be like to have a career in research,” he told me.

At Muhlenberg, REU students work on projects as part of a team or one-on-one with a professor or mentor.

“At the end, we hope there will be a professional product—a journal article or presentations at regional, national, or international conferences. Some students turn their project into a senior thesis or capstone experience. Others have turned it into a master’s thesis.”

Most REU sites are at institutions of higher learning, but some are at research institutions. Each REU site is run a little differently—for example, some have application deadlines as early as January, some last eight weeks and others 10—but all require students to be U.S. citizens or permanent residents enrolled full time as undergrads. At least half the students in a cohort must come from outside the home institution.

Some sites may require a minimum GPA or the study of certain courses.

Accepted students are given a stipend of $4,500. Housing and travel are covered; some funds can be used to help with travel expenses to a conference.

I spoke with two students in the REU at Muhlenberg, Makkah Davis and Carlos Samuels, who is from Guyana.

Davis, a rising senior in math certification in secondary education at Moravian College in Bethlehem, Pennsylvania, heard about REU through her academic adviser and her participation in SOAR: Student Opportunities for Academic Research at her school.

How does she feel about REU? “This was a great opportunity to explore more about research, specifically in the field of mathematics.”

A highlight for Davis was visiting Casa Guadeloupe, a local summer enrichment program for middle schoolers. She and four other REU students—a diverse group of black, Mexican, and female participants—taught math concepts at a “more digestible level,” she told me.

“The trips to local businesses were excellent experiences for me as an aspiring educator,” Davis says. “Showing the application and practicality of math was inspiring.”

Carlos Samuels, who came to the U.S. four years ago, is a rising junior at Medgar Evers College, a CUNY school in Brooklyn, New York. The mathematical sciences major, computer science minor learned about REU by attending math conferences.

He applied to 10 REU sites and was accepted to Muhlenberg’s.

“It’s very competitive, but a really wonderful program,” he told me. “We’re working with the OEIS database of integer sequences.”

Samuels worked on game theory and strategy, and REU provided his first experience working with white students, which he describes as “definitely different.”

“The whole point of being diverse is so we can get this connection with each other, share ideas with others. It’s really crucial. We each bring what we have to the table,” he told me.

He recommends that more students apply to REU. “Not just African Americans but all students,” he says. “It’s not that they aren’t being accepted [to REU]—African American students are not applying.” He also urges black students to attend math conferences.

Fiorini says REU is his favorite program because over time he seems a transformation in the participants.

“It’s amazing how these bright, dedicated, hardworking students begin to see that they can do this.”