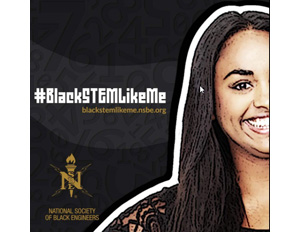 The National Society of Black Engineers (NSBE) launched a new campaign, #BlackSTEMLikeMe, an initiative encouraging black students and professional in STEM (science, technology, engineering, and mathematics) to share their “stories and passions.â€

The campaign’s goals are to showcase the work of black STEM professionals; demonstrate to black children that these careers are interesting and achievable; and to demonstrate the value of membership to NSBE.

“NSBE is very excited about this campaign, which makes a conscious effort to highlight black men and women in STEM, and show young black boys and girls that this is a career path that it’s cool for them to pursue,â€ said NSBE National Secretary Racheida Lewis, in a press statement.

“Being a member of NSBE has enabled me and many other black students, to successfully complete engineering and other STEM-related degree programs. It has empowered me to pursue my passion of educating others about STEM, through initiatives such as #BlackSTEMLikeMe.â€

Trina Fletcher, the director of Pre-college Programs for NSBE and a Ph.D. candidate in engineering education at Purdue University, spoke on the importance of African American STEM role models and mentors.

“Without my STEM education and professional career opportunities, I would not be the leader and woman that I am today,â€ Fletcher said, in a released statement.

“As a member of NSBE and now full-time employee of the organization, I’ve been able to see the impact we have on people of color, ranging from K—12 students, to professionals on their way to retirement from their companies. I encourage all black parents and caregivers to take advantage of the opportunity to expose their children to STEM through #BlackSTEMLikeMe, as well as NSBE youth programs such as our Pre-college Initiative and the Summer Engineering Experience for Kids (SEEK).â€

NSBE will also hold a series of panels nationwide called “Hidden Figures Mixer and Power Panel Discussion.â€ The first session is scheduled for February 2, in Oakland, CA, and at Stanford University on February 3. The discussion will include Hidden Figures actor Karan Kendrick.