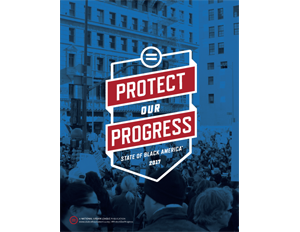 Marc Morial, president of NUL, says in a statement that although change is slow, this year’s report had to address “the shift in power and prioritiesâ€ at the White House. Although there were plenty of problems during the Obama years, Morial notes areas of progress.

“Recent proposals before Congress would shift desperately needed resources away from underfunded public schools toward our heavily-invested-in military,â€ Morial says in the report. “The federal budget currently under consideration would slash the budget of the Departments of Health, Education, Housing, and Labor–a blueprint for a sick, uneducated, homeless, and unemployed America.â€

In the area of education, the report measures an Equality Index of 78.2% for black people, whereas whites have 100%. The overall Equality Index, which considers all five areas, is 72.3% for blacks and 78.4% for Hispanics.

The National Urban League advocates what it calls a Main Street Marshall Plan. (Not unlike the Marshall Plan implemented after World War II, which had left much of Europe devastated. Officially the European Recovery Program, the Marshall Plan rebuilt the economies of Western Europe after the war.)

The parallel is clear. What if black America had the infusion of resources Western Europe received after the war? The National Urban League is calling for “bold, strategicâ€ investments in America’s urban communities–from early childhood education to comprehensive investments in infrastructure.

According to the report, such education investments would do the following:

And there’s a role for black Americans who have “made itâ€ to play as well. I spoke with Tony Allen, Ph.D., head of Corporate Reputation at Bank of America, who contributed to the State of Black America report.

He says middle- and upper-class black Americans need to go beyond the Greek letter organizations, Masonic lodges, debutante balls, and Jack and Jill affiliations–to embrace an intentional solidarity, what he calls an “active re-integration,â€ with those who’ve been left behind.