CEO Spotlight: Nationwide's Steve Rasmussen on the Side of Diversity and Inclusion (Part 1) 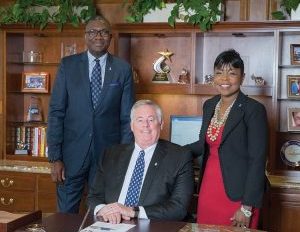 Whether it’s the humorous series of commercials featuring NFL football legend Peyton Manning or the R&B-driven ad with Leslie Odom, the Tony Award-winning star of the Broadway hit Hamilton, the common thread is the iconic tagline: “Nationwide is on your side.â€ For 50 years, that slogan has been used to communicate to millions of consumers the value of products and services from the Columbus, Ohio-based insurance giant.

That catchphrase, however, is much more than a marketing hook. That statement reflects the culture of the $40.2 billion company. And in every nook and cranny of the company–from rank-and-file employees to corporate directors–it demonstrates an ongoing commitment to diversity and inclusion, in part, through retention and advancement of African Americans. For example, two African Americans, Executive Vice President and Chief Administrative Officer Gale V. King and Executive Vice President and Chief Marketing Officer Terrance Williams, serve as members of its nine-person leadership team. And that’s not to mention significant African American senior management representation among core lines of business.

D&I is front and center;Â from the orientation of new associates to the identification of high-potential leaders. Moreover, Nationwide has been aggressive in procurement spend with minority-owned businesses, including the BE 100s–the nation’s largest black-owned businesses. (Nationwide currently serves as title sponsor for the Black Enterprise Entrepreneurs Summit.)

That level of participation, critical to the company’s innovation, vitality, competitiveness, and profitability, is the reason Nationwide has been a perennial on the BLACK ENTERPRISE roster of Best Companies for Diversity. Our editors found the common trait of the most inclusive companies is that such policy and direction comes from involvement from the very top. In this case: CEO Steve S. Rasmussen. BE Editor-in-Chief Derek T. Dingle spoke with him about how he creates an environment “where everyone matters.â€ The following are edited excerpts from that interview:

How have you made diversity and inclusion a part of the company’s DNA?
RASMUSSEN: Our culture is what defines us, and our associates define that culture. If we don’t include all views within our organization then we really can’t be effective in terms of our work with our members and others, because we engage in business with virtually every part of the American public. Our diversity of viewpoints has helped to sustain our culture and make our organization successful.

How does Nationwide’s culture make it distinctive from its competitors?
RASMUSSEN: What makes Nationwide distinctive from our competitors has been our ability to create a culture of engagement. Diversity and inclusion have been a crucial part of creating that engaged worker–a group of associates committed to being strong stewards of our members’ dollars and providing the kind of services our members need. That performance [is] reflected in our growth rates, membership satisfaction, and our associates’ pride in their contributions. In fact, a great deal of our success has been a result of the development of an environment in which people feel safe and protected as well as our acceptance of [people’s] boundaries and who they are.

How do you ensure that suppliers embrace your standards?
RASMUSSEN: Our selection process involves a series of extensive interviews with prospective vendors to ensure that they actually have a defined program of diversity and inclusion. Frankly, we like to conduct business with organizations that fully embrace the same cultural values. We are very cautious about that, particularly with consumer-facing suppliers. We want to make sure that they not only talk to the fact that they’re in favor of diversity and inclusion but consistently demonstrate it in the way they operate their organizations and, as a result, provide the sort of opportunities and environment in which people feel safe and included.

Share with me how Nationwide’s board is engaged in D&I?
RASMUSSEN: Early on, our board was very much committed to bringing diversity to corporate governance and, as a result, we recruited women, African Americans, and other diverse groups as directors. In fact, we have an extremely active board that views a significant aspect of their job as the management of our culture. Since Nationwide is a member-driven company, our board holds all of us accountable to meeting that mandate. They serve as the standard-bearers of our organization. As such, our stakeholders gain tremendous benefits from their stewardship. For instance, two of our directors, both women, one African American, shared their journeys with a group of our associates during one of our recent training sessions. It proved to be a great opportunity for associates to hear from very effective, very successful women and use that as a learning experience.

Part 2 of this interview will publish on Friday, Nov.4. You can view the “50 Best Companies for Diversity” list here.