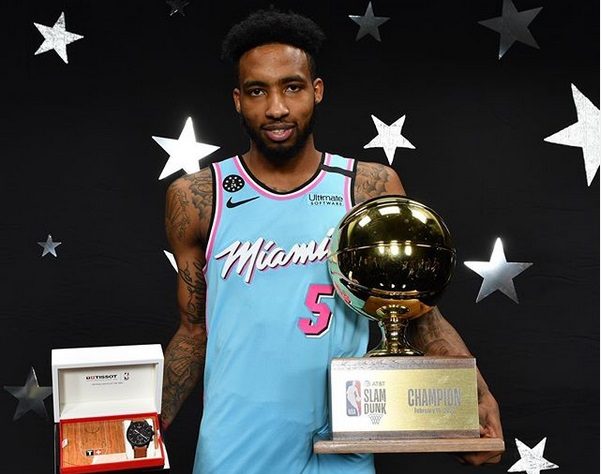 Making a splash in a nationally televised contest can do wonders for you! The Miami Heat’s Derrick Jones Jr. receives a sneaker deal with PUMA after winning a controversial dunk contest at last weekend’s NBA All-Star Game, according to ESPN.

Jones, who is averaging 8.7 points and 4.2 rebounds per game, was involved in a highly contested and much talked about dunk contest against Aaron Gordon of the Orlando Magic. Jones, who wore a white and pink Puma Clyde Hardwood sneaker, wasn’t the only one to land a deal due to the excitement of the contest. Earlier in the week, Gordon landed his own high-profile sneaker deal, signing with Chinese brand 361 Degrees.

It was a perfect birthday gift to the Miami Heat player, who won the dunk contest on his 23rd birthday.

Jones posted about the signing after officially becoming part of the PUMA family, “It was an honor to rep PUMA while winning the brand’s first-ever dunk contest. Excited to officially join the #pumafam.”

It was an honor to rep PUMA while winning the brand’s first ever dunk contest. Excited to officially join the #pumafam. New wave. 🏆✈️ @pumahoops

Jones played one season of college basketball with the UNLV Runnin’ Rebels before declaring for the draft, where he wasn’t selected. But on Sept. 25, 2016, Jones signed with the Phoenix Suns for training camp and played on the team that season. After being waived by the Suns on Dec. 7, 2017, he eventually signed with the Miami Heat on Dec. 31, 2017, where he is still currently playing.

Jones won the Slam Dunk Contest over Gordon during the 2020 NBA All-Star Weekend in Chicago. The two players received perfect scores in their first two dunks in the second round, forcing an overtime round. After they both earned perfect scores on their initial dunks, Jones won the contest by scoring a 48 after taking off just past the free-throw line to complete a windmill dunk; Gordon received a 47 after dunking over 7-foot-5-inch Boston Celtic player Tacko Fall.