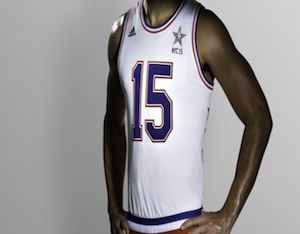 Sports fans who live in the New York City area will be overjoyed to learn that the NBA will bring their much ballyhooed All-Star Weekend in 2015.

The league and its outfitter Adidas have unveiled the new designs for the uniforms and apparel for the 2015 NBA All-Star Game on Tuesday morning. The uniforms are clean, simple and starkly plain compared to the loud and aggressive schemes from previous years. “It’s simple and timeless,” said David Cho, who oversees the NBA partnership for Adidas, which is the league’s official on-court apparel supplier. “It’s a nod to the history, culture and style of New York City basketball.”

Lacking the traditional “East” and “West” designators, which has been around since the 1960s, the All-Star Game uniforms instead will be note conference players by color. The Eastern Conference will wear white and Western Conference players will wear black. Accessories for each side — which includes arm bands, headbands and shooting sleeves — will be in the traditional colors (blue for the East, red for the West). Players first and last names will be sewn above and below the number, which is an interesting change from previous jersey incarnations.

The 2015 NBA All-Star jersey will also feature five unique stars filled with icons from each of New York City’s five boroughs. Unisphere will stand for Queens, Waves will represent Staten Island, Checkered Taxi Pattern shall come to be the profile for Manhattan, Vinyl Record will empower those who live in the Bronx and Brownstone Bricks will be the feature for Brooklyn. The warmup jacket will be a military-themed outfit with patches denoting years played in the All-Star Game and other notable awards and titles. There’s also a shooting shirt that features the block lettering similar to the font used on shirts in the 1950s and ’60s.

Adidas and the NBA will start selling the apparel to the public at large beginning in January.

Meanwhile, the 2015 NBA All-Star Game will take place on Feb. 13-15. The event will be split between Brooklyn’s Barclays Center and Manhattan’s Madison Square Garden, where the latter will be center for the actual game on Feb. 15.