Andrew Wiggins Jersey is not Discontinued, Just Sold Out 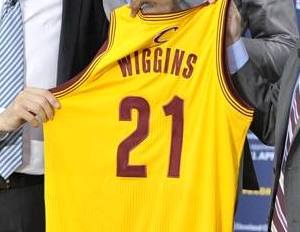 According to NBC Sports, the NBA is claiming that Cleveland Cavaliers top draft pick, Andrew Wiggins’ jersey is sold out and not discontinued, as it was displayed over the weekend. Rumors have been steady that the team will trade its top draft pick in a deal to obtain Minnesota Timberwolves’ Kevin Love.

This snafu did nothing but caused skeptics to assume it’s already a done deal. A league spokesman stated thatÂ Wiggins jerseys are simply sold out.Â  There is a temporary period on the site where it is reflected as “discontinued.â€

The No. 1 draft pick, although signed to Cleveland, can’t be traded for at least 30 days after the contract is signed. Ever since LeBron James made a decision to return to Cleveland, the team has been in talks to bring Kevin Love to Ohio and rookie Andrew Wiggins is rumored to be the centerpiece of the deal.