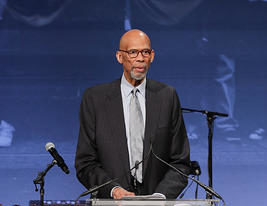 One of the best players to lace up a pair of sneakers and throw on a basketball jersey and shorts is being acknowledged by the professional sports league he dominated in his playing days!

The NBA has announced that it has created the Kareem Abdul-Jabbar Social Justice Champion Award. This is a new annual honor that will acknowledge a current NBA player for the pursuit of social justice and upholding the league’s decadeslong values of equality, respect, and inclusion.

“I’m honored and grateful to be associated with this award that will recognize the dedicated and selfless people fighting to promote social justice for all marginalized people,” said Abdul-Jabbar in a written statement. “To me, it’s another giant step in the right direction for the country and all people who value equality.”

The Kareem Abdul-Jabbar Social Justice Champion Award is named after six-time NBA champion and Naismith Memorial Basketball Hall of Famer Kareem Abdul-Jabbar, who is one of the most accomplished players in NBA history. Abdul-Jabbar holds league records for regular-season MVP awards (six), All-Star Game selections (19), and career points (38,387) captured during his 20 NBA seasons playing for the Los Angeles Lakers and Milwaukee Bucks. Abdul-Jabbar joined the NBA in the 1969-70 season after leading UCLA to three consecutive national championships.

The recipient of this new award will have advanced Abdul-Jabbar’s mission to drive change and inspired others to reflect on injustice and take collective action in their communities over the previous year.

“In addition to being one of our greatest players, Kareem Abdul-Jabbar has devoted much of his life to advocating for equality and social justice,” said NBA Commissioner Adam Silver. “With this new award, we are proud to recognize and celebrate NBA players who are using their influence to make an impact on their communities and our broader society.”

Each and every one of the 30 NBA teams will submit the name of one player from their roster to be the Kareem Abdul-Jabbar Social Justice Champion. The finalists and winner will be selected by a committee composed of NBA legends, league executives, and social justice leaders.