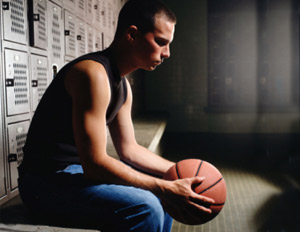 As the Final Four draws closer and NBA teams look to solidify playoff positioning with the same scrappiness their younger counterparts use to cut down the nets with, it’s clear that the game of basketball is alive and well despite pay to play scandals and “super teams.â€ As the game has grown into a global phenomenon — aided by players like Yao Ming, Dirk Nowitzki, Tony Parker, Manu Ginobili, Serge Ibaka and Andrew Bogut, the game’s reach has transcended domestic urban playgrounds and barns where rickety hoops cling to a bent, 10-foot existences. In total, over 38 different countries and territories are represented in the NBA. The game is safe. The sport is growing. Yet, as this growth continues to occur, one particular demographic continues to shrink. What has happened to the White, American basketball players of yesteryear who took on superstar status as opposed to super-sub stat lines?

Simply put. They’re gone. According to research done by ESPN’s Outside the Lines back in 2009, 71.9% of NBA players are African American, 18.3% are international and 9.9% are White Americans–meaning there is an average of one per team–with Memphis, Detroit, Los Angeles (Clippers) and Washington having zero. Of those other 26 teams, the Los Angeles Lakers, Milwaukee Bucks and Minnesota Timberwolves are the only franchises that carry more than two White American players on their current roster. Aside from Kevin Love and David Lee, that crop of players that makes up that nearly 10 percent is hardly considered to be at the elite level. Consider this: until Kevin Love came in the league there hadn’t been a White American NBA All-Star since Brad Miller in 2004. You’d have to go all the way back to John Stockton in 1997 to find a starter.

It seems that the 60’s-early 90’s produced the “great White hopes,â€ while 2000 and beyond has produced the “10 day contract nopes.â€ The rules of basketball have hardly changed since James Naismith picked up that peach basket in Springfield, Massachusetts. The collegiate landscape offers up plenty of white, American stars. Then what gives? Why aren’t these same collegiate court savants becoming stars? There are 312 college basketball teams at the Division 1 level comprised of 4,000 players–sifted and chewed threw from a high school class every year boasting more than 540,000 aspiring MJ’s, LeBron’s and Kobe’s. According to College Times, these athletes then have a 24,550-1 odds of ever going pro–while chances of being struck by lightning in one’s lifetime is 10,000-1. The only luck involved in making the pros involves harnessing ability and steering clear of devastating injury.

It’s clear that White, American players are progressing through the high school and collegiate ranks–perpetually finding homes at top tier programs like Kansas, Duke and UNC on a yearly basis. Names in the past like Laettner, Redick, Morrison and most recently Fredette all were perennial All-Americans who excelled collegiately and joined the pro ranks with limited to average impact. In fact, the entire All-American team since the early 90’s is riddled with White American players who never entered the star designation in the pros (Montross, Reeves, Van Horn, LaFrentz, Szczerbiak, Murphy, Dickau, Collison Hansbrough). You’d have to go as far back as 1985 with Mark Price to find a collegiate player besides John Stockton who came to the pros and made multiple All-Star teams. While these players all find eight-plus year careers in the league, it’s as “specialistsâ€ not stars. The NBA still looks for role players–they just want athleticism as the skill-set over spot up shooters and big boned, corn fed seven-footers who will give a team six fouls a night.