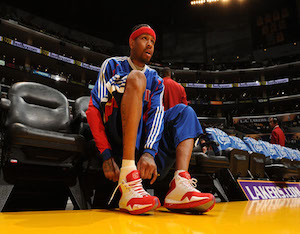 Allen Iverson constantly dazzled us with his street-wise flair and creativity with the crossover. Now, the former NBA superstar is chin checking Nike for putting out a shoe that sneakily honors the legend without permission.

Iverson, 39, claims that the American multinational conglomerate used his identity, likeness and persona without asking him to put out a sneaker out of the company’s Zoom Flight ’96 collection. Ambiguously labeled with the No. 3 — Iverson’s playing number — eagle-eyed sneaker heads spot it on each back heel and the red, white and blue colors of the Philadelphia 76ers serves as the colorway.

The Sixers and Iverson aren’t named on the sneaker or on the branding for the shoe, which were expected to be released this year or in early 2015. Iverson’s lawyer, Derek Challenger, quickly sent a letter to Nike this week to object the notion of a new shoe from Nike. “Nike is clearly trying to use Allen Iverson’s celebrity status and persona to promote Nike’s shoes,” Challenger said. “There’s no other No. 3 that played for the 76ers that came out of the 1996 draft. For Nike to use his status to sell shoes, and not get his permission, to not compensate him, is bad business.”

Challenger told press Thursday that after learning Nike was pulling the shoe that Iverson should be compensated for shoes that have already been sold. “They should get back to me with a number for all this,” he said. “I hope before the week is over I hear from them directly.” According to Lucas Ehrbar, editor of the website Nikeblog.com, the sneaker was released under the Nike Sportswear banner in Asia already. Iverson, who played his first 10 seasons with the 76ers, was credited with merging Hip-Hop culture and basketball in a truly innovative way.

Even as a retired player, Iverson’s global appeal is domineering, as the Nike tribute sneakers can already be found on eBay for $109 to $129 a pair. “They’re not meant to play basketball in. It’s about fashion and lifestyle,” Ehrbar said.

Iverson and New York rapper Jadakiss are slated to launch the Villa x Reebok Pump at a restaurant near the 76ers’ practice facility in Philadelphia.