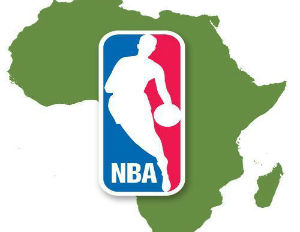 The NBA is on the move again. After recently teaming up with FIBA to host a camp in Cuba this past weekend, select players, coaches, and personnel will be packing up and taking their talents to Johannesburg, South Africa for the leagues first official exhibition game on the African continent. The Huffington Post reports that the announcement was made during a press conference held by NBA Africa Vice President and Managing Director Amadou Gallo Fall, South Africa’s Minister of Sport Fikile Mbalula and U.S. Ambassador to South Africa Patrick S. Gaspard.

[Related: Where Are They Now? Casualties of the NBA’s Amnesty Clause]

“The NBA has worked hard to grow the game of basketball in Africa, and I am excited to take this next step of playing our first game on the continent… Our players have been tremendous partners in this effort, and all of us look forward to sharing the authentic NBA experience and the values of our game with fans in Africa.” Silver said in a statement that accompanied the announcement. According to NBA.com, basketball is more popular in West Africa than in South Africa, but the infrastructure exists already for airing the game on the South African cable network, and the league visits the country regularly for training and development camps as well as charity games.

Details of the upcoming summer game are currently sparse, but what is known is that two All-Star players, Chris Paul and Luol Deng, of Sudan, will serve as the captains of Team World and Team Africa, respectively as reported by ESPN. While the final rosters have yet to be completed, the Oklahoma City Thunder’s Serge Ibaka, from the Congo, and Minnesota Timberwolves Gorgui Dieng, from Senegal, have committed and will play alongside Deng on Team Africa. Paul & Team World will feature other international NBA stars from around the globe.

In a recently released video the NBA is using to promote the game taking place August 1st, Team Africa captain Luol Deng says, “Basketball is a growing sport, it’s an international sport [and] it’s touching so many different parts of the world now… A lot of people in Africa have always been passionate about it. And growing up, they never had the chance to watch [NBA] basketball. And now, they have the chance to do so and be more involved. It’s just an amazing thing, and I’m glad the NBA is doing its part to get the people in Africa engaged.”

The game is being held as part of the NBA’s ongoing “Basketball Without Bordersâ€ initiative. To date, there have been over 35 players with ties to Africa to play in the NBA – highlighted by Hall of Fame player Hakeem Olajuwon, Nigerian, who was drafted number one overall by the Houston Rockets 30 years ago, and also by 2015 Hall of Fame inductee Dikembe Mutombo, of the Congo – who recently took part in the NBA’s first training camp in Cuba.